Xpat Opinion: A Pantheon “In The Heart Of The Nation” In The Spirit Of Imre Makovecz 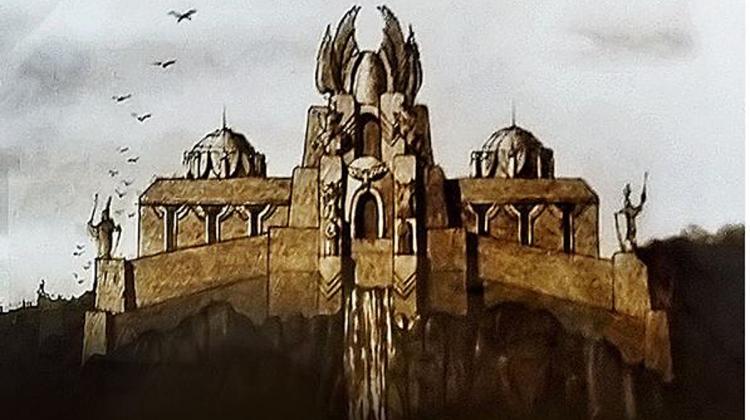 Although Imre Makovecz, the favorite architect of Viktor Orbán and the Hungarian political right in general, died in 2011, his name still appears in the Hungarian media. The last time was only a few days ago, when it was discovered that the readers of an English-language internet site, Daily Dot, considered Makovecz’s Catholic church in Paks the most “evil-looking church” anywhere.

“Yeah, I’m 99 percent sure this was built by some goofy mom who gives out weird treats on Halloween, but I’ll prefer to consider this as Dracula’s seasonal residence, OK?” the paper observed. HVG, which reported the story, didn’t quite understand why this Makovecz creation seemed frightening to the readers of Daily Dot, but cagily they attached a photo of it taken from an entirely different angle.

I have a distinct aversion to Makovecz’s buildings and an even worse opinion of him as a person. He was a bigoted, narrow-minded, chauvinistic, ignorant anti-Semite. Anyone who wants to know more about him should read my post titled “An interview with Imre Makovecz, a favorite of Viktor Orbán.” The interview took place in May 2011, shortly before his death.

Makovecz may have died, but a whole slew of Makovecz epigones have surfaced. The Pancho Arena in Felcsút, for instance, was designed by Tamás Dobrosi, an admiring pupil and associate of Makovecz. Those of us who are not fans of Makovecz’s work will most likely have to endure dozens of buildings in the Makovecz tradition in the future.

It’s one thing to be confronted with local churches and soccer stadiums done in Makovecz’s style. It’s another thing entirely to have his style dominate the Budapest cityscape. Such a fate might be in the offing with the government’s decision to “revitalize” the Gellért Hill, which overlooks the Danube and offers one of the best panoramic views of the city.

Historically, the site is associated with an act of Christian martyrdom. According to a late eleventh-century manuscript, Saint Gellért/Gerard, originally from Lombardy, the bishop of Csanád (today Szeged-Csanád), met his death here. In 1047 a group of pagan insurgents dragged him to the top of the hill in a cart, which then they let loose to plummet over the cliff.

Makovecz was eyeing the Gellért Hill for a long time. In an interview with Index in 2008 said that both the Citadel and the Statue of Liberty, which currently dominate the hill, are atrocities.

After all, the Citadel was built for military purposes by the Austrians after the failed revolution of 1848, and the Statue of Liberty was ordered by the Soviet occupiers. He showed his plan to the journalist of Index, which was a large, typical Makovecz-looking building, a national pantheon. He told Index that he had received no request from anyone to come up with such a design, he just “drew the plan for the entertainment of God.”

He then elaborated on the details of how the Statue of Liberty came into being. As I pointed out in my 2011 article on Makovecz, historical accuracy is not his strength. He repeated the urban legend that the Statue of Liberty, created by Zsigmond Kisfaludi Strobl (1884-1975), was originally sculpted as a memorial for István Horthy, son of the governor, who died on the Russian front in 1942. According to that untrue story, when the Soviet order came for a statue to commemorate the liberation of Hungary, Kisfaludi Strobl simply adapted it to serve the new purpose.

Although the original Statue of Liberty has undergone modifications–the Soviet soldier at the base was removed as was the Cyrillic script, the changes didn’t appease Makovecz. He dismissed it as an inferior piece of art, despite the consensus that Kisfaludi Strobl’s work is of high quality. Moreover, if asked, I doubt that too many people would want the statue to be removed. By now it is an integral part of the city.

Why do we need a pantheon on Gellért Hill? Because, for some strange reason, for the last couple of centuries the idea has persisted that the hill is “the heart of the nation.” The idea of making the Gellért Hill a national sacred place was born in the 1840s, starting with an essay by István Széchenyi. Several similar plans were advanced throughout the nineteenth century.

In fact, the pantheon came close to being built. In 1906 the young architect István Medgyaszay (1877-1959) won the commission to design a national pantheon to replace the Citadel, which the military had left only in 1897. His design most likely inspired Makovecz. As Makovecz explained, this national pantheon would “memorialize all the important Hungarian historical characters from our King Árpád to our day. Just think what this place would look like on All Saint’s Day. Half the country would be here.”

The government’s open invitation for a remake of the Gellért Hill shows the scope of the project: the revitalization of both the park and the architecture of the area. The most important goal is to make good use of the Citadel, to give it some function in addition to filling the hill with “spiritual and sanctified content.”

There is no doubt in my mind that the government is planning to erect a pantheon along the lines of Makovecz’s design and that one of his disciples will be named chief architect. As for the Statue of Liberty, it is not mentioned in the invitation, but I can’t imagine that the present Hungarian government would allow the Statue of Liberty to stand next to the National Pantheon.

Even as the fight over the Városliget continues, the government is already preparing for the next war with the population of Budapest.