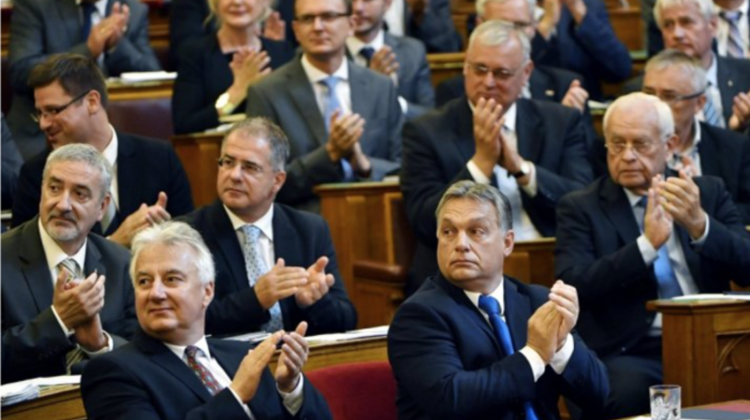 Fidesz is reframing the context of its upcoming referendum opposing EU refugee resettlement quotas, in light of recent public polling data that suggests the vote might not garner the required amount of votes to be valid.

The October 2 referendum, for which the government has campaigned tirelessly using more than HUF 4 billion (USD 14.5 million) of taxpayer money, requires the participation of half of the eligible voting population plus one to be valid under Hungarian law. This means that 4.1 million Hungarians must cast a valid vote, either for or against the resettlement quota.

Recent data released by pollster Závecz Research Institute shows that the proportion of those intending to vote against the quotas went down in August, while the number of undecided” voters increased, reports ATV.hu. On ATV’s “News of the Day” television program, Tibor Závecz, director of the polling institute, said, “It is doubtful, but not ruled out, that the 50 percent participation mark will be reached.”

Závecz added that the referendum is sure to be invalid if the government’s campaign does not become stronger in the three weeks remaining before the vote, and if voters get a better sense of the opinions of the left opposition.

Responding to the worrisome reports, Prime Minister Viktor Orbán has begun laying the groundwork for preemptive damage control in the case of an invalid referendum.

Party mouthpieces have been consistently referring in recent days to a referendum held in 2004, which was meant to decide whether Hungarians living abroad, without Hungarian citizenship, should be provided with a preferential naturalization procedure. The referendum failed due to lack of participation, with only 37.5 percent of voters casting valid votes. Still, this failure can be viewed as a victory, if framed correctly.

According to Orbán, “[The 2004 referendum] seemed like a failure, but we wouldn’t have been able to pass the national unification dual citizenship law of 2010 if we hadn’t had this moral base on which we could stand. That is, that the majority of Hungarians who went to vote in 2004 said yes, there should be national unification. Those who said that there aren’t public consequences to this decision, I think they know that they aren’t speaking the truth: there are very serious consequences.”

“This referendum will be valid in any case,” he said, also citing the failed 2004 referendum as a moral victory for the government’s position. “This was a moral high ground on which we could base the national unification, when the time came in 2010 and Fidesz won two-thirds,” he said, adding that in the October 2 referendum, a majority of voters are sure to vote “no” to the quotas, validating the legally invalid.

Framed this way, even if the referendum fails, it can be considered a “moral success” which justifies its staggering costs.

Won’t go down without a fight

At the Fidesz party meeting in Balatonfüred last week, Orbán encouraged Fidesz mayors and voter district presidents to do everything they can to draw voters to the polls. He also emphasized the need for “context creation”, whereby the voting populace would be fitted into the context of the refugee question, and therefore convinced to perceive the government’s aim as their own.

“We should proceed exactly as we did in the case of the utility cost reduction (rezsicsökkentés),” he said.

Orbán looks at the referendum as the “dress rehearsal” for the 2018 parliamentary elections. Those election district presidents presiding over districts where insufficient amounts of voters are mobilized can expect to lose their jobs in the fall, according to Nepszava.hu. Such firings have already taken place, in 2013, when five Fidesz election district presidents were stripped of their jobs when Orbán was “unsatisfied with their work.”

Other reprisals are expected against areas with insufficient voter turnout. At the annual Fidesz picnic Saturday afternoon in Kötcse, south of Lake Balaton, Orbán was reportedly overheard in the presence of Fidesz mayors speaking about a “rumor”, that those towns which don’t go to vote in adequate numbers, or those which vote against the government’s propaganda, will receive the most immigrants in the case of resettlement.

Until then, the campaign shows no sign of slowing, even as the National Election Committee (NVB) has formally banned the further distribution of an 18-page campaign booklet. The government launched last week a series of public forums in more than 200 locations, where party members meet with locals to discuss the grave importance of voting in the referendum. It also is erecting voter information stands in more than 700 public places across the country.