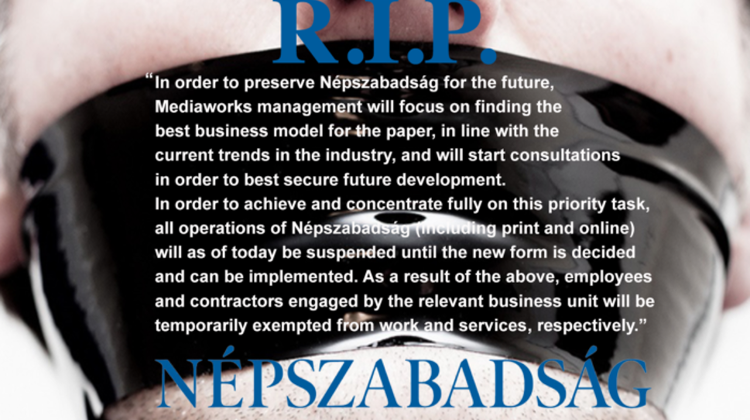 Népszabadság publisher Mediaworks Hungary Zrt. announced today that it had suspended the publication of the national print daily and its on-line edition, nol.hu. It also announced the departure of Mediaworks CEO Balázs Rónai.

The decision to suspend publication follows a series of articles exposing details of the private life of Central Bank Governor György Matolcsy’s highly embarrassing to the government of Viktor Orbán, who nominated Matolcsy for the position over strong objections on the part of the political opposition and industry experts alike.

The final print edition contained a front page article about Matolcsy’s long affair with former MNB employee Zita Vajda, who followed Matolcsy from the Ministry of National Economy to the central bank in 2013.

Earlier this week the left-wing daily exposed that Matolcsy had been given the use of a luxury flat in Budapest’s castle district owned by UniCredit CEO and Hungarian Banking Association president, Mihaly Patai. If true, then this constitutes a clear conflict of interest, as the Central Bank is responsible for overseeing the operations of banks, including Patai’s UniCredit, Hungary’s largest commercial bank.

Mediaworks Hungary Zrt. was created in October 2014 after Vienna Capital Partners acquired publishing company Ringier and much of the portfolio of Axel Springer. Mediaworks currently publishes over 60 publications in Hungary, including the print version of Világgazdaság (World Economy), Manager Magazin, and a number of county daily newspapers.

Vienna Capital Partners is owned by Heinrich Pecina, a business associate of Hungarian banking and media mogul Zoltán Spéder. Several months ago Spéder became the subject of a government investigation that included a police search of his home. Many believe this was the government’s way of pressuring Spéder to sell key media assets to a media company indirectly controlled by prime minister Viktor Orbán.

Instead of the customary daily news, readers clicking on nol.hu this morning were redirected to a “priority” press release in Hungarian and English announcing that publication of the loss making 60-year old newspaper had been suspended until further notice because it “is adversely affecting the performance of the whole [Mediaworks portfolio] and will continue to do so in the long term, unless it is put on a completely new footing.”

“As a result of the above, employees and contractors engaged by the relevant business unit will be temporarily exempted from work and services, respectively” reads the statement, adding that Mediaworks “truly values its subscribers and, as in the past, will treat them with the utmost care and diligence” and that to this end it will “contact subscribers as a matter of high priority in the coming days” in order to offer them “a choice of alternative subscriptions from Mediawork’s portfolio or full reimbursement of the paid subscription for the period in which the operation is suspended.”

Not clear is why Mediaworks decided to suspend publication of Népszabadság less than one week after October 2nd’s referendum. Nor does the press release explain why it was necessary to take down the entire nol.hu website which serves as a repository for much of the content generated by the staff over the years. However, online daily 444.hu writes that closing the 60-year old left-wing newspaper may be in preparation for selling a large portfolio of print publications to a media company owned by businessmen close to Fidesz.

Earlier this year rumors circulated that the 60-year old paper was to be sold to an investor close to Fidesz. In light of the recent purchase of a slew of media outlets by companies owned or run by relatives of close business associates of senior government officials, many believed it was only a matter of time before Hungary’s most important “left-wing” paper was either bought up or forced out of business.

“Dear followers! The editors of Népszabadság were informed at the same time as the public that the newspaper is being closed with immediate affect. Our first thought is that this is a putsch. We will be in touch shortly.”

Within an hour a second post appeared inviting followers to join the editorial staff and various NGOs in protesting Mediaworks’ decision in front of parliament at 6 pm.

The end of an era

In addition to the story about Matolcsy’s six year affair with Vajda, the week-end edition contained articles about the “luxurious right-wing” and how Prime Minister Viktor Orbán was not upset by propaganda minister Antal Rogán’s trip to the Hungarian countryside with his family via helicopter and luxury, chauffeur-driven car, and government plans to sell off even more state owned ground, presumably to oligarchs and businessmen close to Fidesz. This way, speculates 444.hu, Viktor Orbán avoids the negative publicity of a Fidesz-linked media group closing down a major opposition newspaper.

The independent leftish newspaper will be missed, no least by the Budapest Beacon which found it to be an invaluable source of information about what is really happening in Hungary.