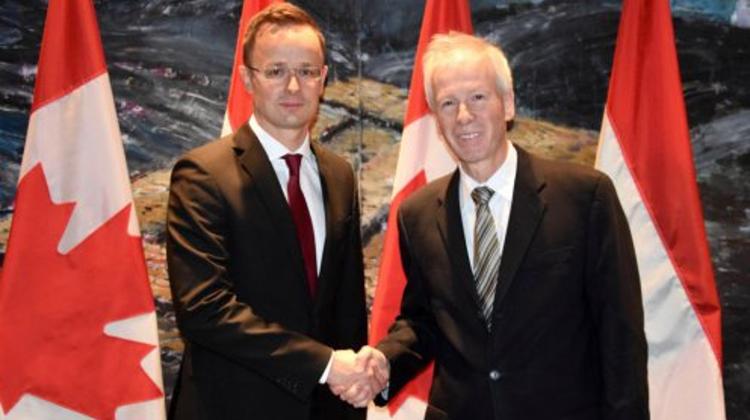 According to Minister of Foreign Affairs and Trade Péter Szijjártó, who is on an official visit to Canada, it is in Hungary’s interests that the free trade agreement between the European Union and Canada should come about.

Mr. Szijjártó, who was in Montreal to attend a commemoration of the 1956 Hungarian Revolution, began his diplomatic and economic negotiations in the Canadian capital Ottawa early on Monday morning, local time. He held bilateral talks with Foreign Minister Stéphane Dion, after which he met with an influential figure of economic life, the founder-owner of one of the world’s largest gold mining corporations.

Reporting on his negotiations to Hungarian news agency MTI by telephone, Mr. Szijjártó emphasised that Canada and Hungary continue to view each other as key allies, particularly within the fields of military/defence and economic/trade cooperation.

Mr. Szijjártó explained that if the Comprehensive Economic and Trade Agreement (CETA) between the European Union and Canada is successfully concluded then the Hungarian automobile, pharmaceutical and food industries could gain significant ground on the Canadian market.

The Foreign Minister also told the press that Hungary’s Eximbank has opened a 535 million U.S. Dollar credit line to facilitate the success of Hungarian enterprises on the Canadian market. “However, it would be disappointing for both the Hungarian and Canadian governments is we failed to conclude the agreement at the scheduled time”, he stressed, adding that the current CETA “absolutely handles” the various concerns of the Hungarian agriculture and food industry, and accordingly it would be in the interests of the Hungarian economy for the agreement to be concluded as soon as possible.

“Canadian industry, and especially the automobile industry, already regards Hungary as a key production location, and accordingly it is good news that we have come to an agreement with Linomar, one of Canada’s largest automobile industry suppliers, concerning the fact that the company will be realising another investment project in Hungary”, the Minister told MTI, explaining that the company already employs some 2300 people in Hungary and will be creating a further 80 jobs in Orosháza and Békéscsaba thanks to its latest, seven billion forint (EUR 32M) investment. “We also discussed the possibility of the company bringing further capacities to Hungary”, Mr. Szijjártó said.

The Hungarian Foreign Minister stressed that “direct relations are of key importance in cooperation with Canada” and announced that he had come to an agreement on all the details with Air Canada and accordingly from next year the airline will be running five flights-a-week between Toronto and Budapest. “Budapest will be the only capital city in Central Europe to which Canada’s largest airline flies five days-a-week, and we also expect this to result in an increase of the number of Canadian tourists from last year’s figure of 40 thousand”, the Minister said.

Mr. Szijjártó also highlighted the fact that the two countries have also reinforced their military cooperation, within the framework of which the advanced training of Hungarian fighter pilots will continue to occur in Canada until 2021. “Another common point is that Canada will be playing the role of Framework Nation in NATO’s mission in Latvia while from next year the countries of the Visegrád Group will have 150 soldiers deployed in the Baltic state on three-month tours of duty, in addition to which Hungary will again be involved in the patrolling of Baltic airspace from 2019”, he continued.

The Foreign Minister told the press that he had expressed Hungary’s thanks to the people of Canada for admitting 38 thousand Hungarians in 1956. “Today, we are proud of the fact that a Hungarian community of over 300 thousand are adding to Canada’s strength”, Mr. Szijjártó said in closing.

In the afternoon, local time, the Minister of Foreign Affairs and Trade will be taking part in a session of Canadian Parliament, after which he will hold meetings with the speakers of the House and Senate and other parliamentary politicians. In the evening, a 1956 commemoration ceremony will be held at Ottawa’s Canadian Museum of History.