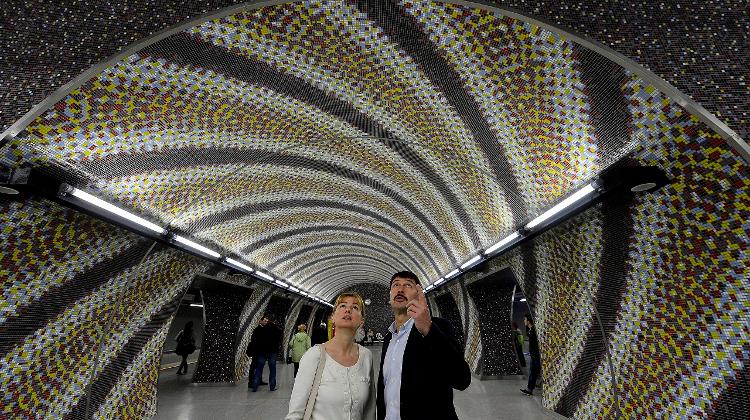 Former Budapest city mayor Gábor Demszky has called for full disclosure following last week’s announcement by Minister Overseeing the Office of the Prime Minister János Lázár that the European anti-corruption office (OLAF) was calling for the return of HUF 76.6 billion (USD 264 million) in EU funds used in the construction of the M4 subway line.

Undersecretary Nándor Csepreghy told state news agency MTI on Monday that OLAF had submitted a report to the government finding that nearly half of funds spent on building the M4 subway were improperly spent, including some HUF 167 billion (USD 576 million) OLAF says was “stolen or fraudulently used.” According to the undersecretary, an additional HUF 106 billion of contracts involved “irregularities,” bringing to nearly HUF 273 billion (USD 941 million) the amount of public funds expended on the subway in violation of European law.

Calling the report an assessment of the Socialist governments of Péter Medgyessy (2002-2004), Ferenc Gyurcsány (2004-2009) and Gordon Bajnai (2009-2010), as well as the administration of four-term Budapest mayor Gábor Demszky (1990-2010), Csepreghy told MTI that the construction of Budapest’s fourth subway line was the biggest project in the 13-year history of Hungary’s membership of the EU, as well as its biggest corruption case.

According to Hungarian MEP Jávor Benedek (Dialogue for Hungary), however, Csepreghy’s statement belies the fact that at least half the funds went missing during the second Orbán government (2010-2014).

According to Csepreghy, irregularities found in 57 contracts, 28 of which involved EU funds, were responsible for “96 percent of the damage.” The other 29 contracts involved the use of central budgetary funds and the proceeds of a European Investment Bank (EIB) loan taken out by the City of Budapest.

Csepreghy told MTI that among the irregularities was the purchase of new subway cars from Alstom, and for this reason the total amount to be repaid to Brussels might increase by tens of billions. (It is not clear from the undersecretary’s statements whether the report makes specific mention of this).

According to Csepreghy, the report implicates a number of individuals by name, including the directorate of the DBR Metró Projekt, Euro Metro Kft., Strabag, Siemens, Alstom, Hídépítő Zrt., the Bilfinger-Porr-Vegyépszer Zrt. consortium and consortia led by Swietelsky and Bamco.

Csepreghy said the irregularities include fees paid to various agents for inside information, payment for services not actually rendered and various conflicts of interest, including instances where the same individual acting on behalf of the state when verifying the completion of work was also employed as an advisor to the contractor in question.

Csepreghy said the report cites examples of valid, lawful and cheaper offers being rejected during the public procurement phase in favor of those demonstrably possessing inside information. “Friendly companies were helped,” he asserted, implying that this involved official malfeasance and abuse of power, conflicts of interest and bribery.

In response to questions, Csepreghy said the government planned to file a criminal complaint with state prosecutors, and insofar as possible would collect damages from those responsible. He said the government’s legal advisors were examining the possibility of releasing the entire OLAF report, and in this regard “the government was maximally committed.”

On Monday Benedek wrote that in the opinion of Dialogue for Hungary “the gravity of the matter does not permit further prevarication”. The party demanded “the immediate release of all information and that those responsible be held to account” regardless of political affiliation.

“We agree with Nándor Csepreghy that the M4 subway reeks of corruption: the traffic data does not warrant its existence,” the opposition party said. “Built for a multiple of what it should have cost, the project’s procurement was characterized by a complete lack of transparency.

The problem is that half of the project (and the majority of the price increase) took place during the time of the Orbán government, which did nothing either about the lack of transparency of the contracts. Furthermore, it failed to investigate the scandalous project.

Every investigation to date has been carried out by the relevant European authorities, the results of which have been kept secret by the Orbán government, which has chosen to leak those facts from the secret material favorable to them.

According to our information, the theft bridges the period 2006 to 2014, meaning that all the governments and city leaders of the past ten years were involved. Previously Jávor Benedek petitioned the European Anti-Corruption Office to investigate the purchase of subway cars.

For this reason we demand the immediate release of information and the punishment of all responsible parties, regardless of their relationship to [Prime Minister] Viktor Orbán. The affair indicates that the creation of a European Prosecutor’s Office should not be put off any longer. If it depended on the government of Hungary, we would not know anything about the theft or about the other political robbery actions involving the theft of EU grants.”

The MEP believes that if the government and the current city leadership have nothing to hide, then they cannot refuse to release all information pertaining to the project.

“Every other solution is acknowledgement that they are also implicated in the affair,” Jávor said.

Demszky calls for release of report

Writing on his Facebook page, former Budapest mayor Gábor Demszky called for the OLAF report to be made public.

“The OLAF report on which Lázár’s people ‘base’ their accusations should be released,” Demszky said. “I don’t think it is by chance that they are handling it secretively … so long as they do not release the report, there is no point in denying the charges, because they will simply make new ones, and this game can be played indefinitely and become infamous on account of the unlimited and unscrupulous nature of the Habony works’ tools,” he said, referring to the pro-government media empire over which the former informal advisor to Orbán presides.

Demszky speculates that the OLAF report objects to the fact that the current city administration failed to fulfill the conditions stipulated by the European Commission, such as the complete restructuring of surface transportation, Park and Ride facilities and the introduction of a congestion tax. He said none of these were realized, and thus the EU is demanding the return of tens of billions of development funds, the total amount of which is the subject of secretive negotiations under way.

Opposition party Együtt (Together) claims the M4 project proves the need for a European prosecutor’s office for the simple reason that Hungarian authorities are clearly not capable of protecting Hungarian and European taxpayers. At a press conference on Monday, Márton Pataki said the M4-related news demonstrated that the prosecutor’s office led by Péter Polt and the Hungarian justice system “had failed and was nearing a state of bankruptcy.”

Pataki, the chairman of Együtt’s Budapest chapter, said the City Mayor’s Office and the State Auditor’s Office (ÁSZ) had prepared its own report in 2010, and both filed criminal complaints. The politician called “outrageous” the fact that the investigation was undertaken by foreign authorities even though the crime was committed in Hungary. He called the government’s decision to file a complaint “an empty PR action.”