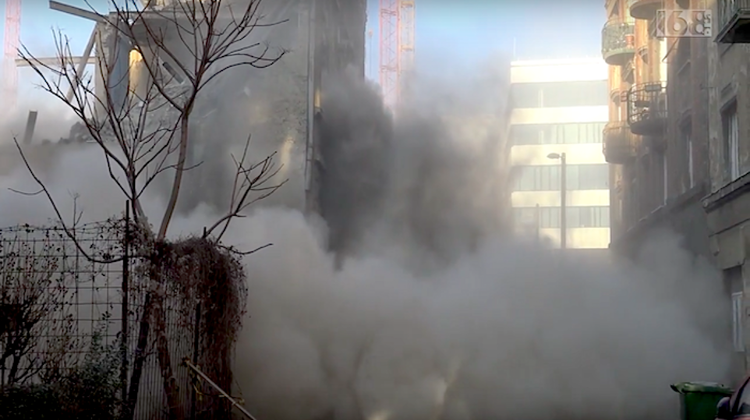 The December 30 demolition of a former landmark building in Budapest’s District 8 at the behest of the local government made headlines after local demolition contractor Nándor Jónás verbally and physically threatened a district assemblyman and a 168 óra journalist.

“Smelly peasants, death to your kind,” was how one of the workers greeted local assemblyman Gábor Kádár (Dialogue for Hungary, PM) in front of the building at 43 János Bókay street where demolition work began on the Danube Steambath the afternoon of December 30 without any visible preparations.

168 óra writes that as late as 2012 the so-called “dragon house” had been listed as a landmark building.

Demolition started at noon after nearly every official office where local residents might register a complaint had closed. In the article it posted the morning of January 2 titled “Unique demolition by man [Budapest District 8 mayor] Máté Kocsis does not know,” 168 óra writes that within minutes of the start of demolition, neighboring streets were covered in dust.
After being repeatedly threatened verbally and physically by Jonás, the district assemblyman called the police.

According to the article, the demolition was carried out by Jon Bau Kft., a company formerly owned and operated by Jonás. The fact that, according to official documents, Jonás is neither the managing director nor the owner of the company prompted 168 óra to ask in what capacity he was present at the demolition.

In 2015 Jonás was caught on film verbally and physically assaulting protesters at an official event. At that time District 8 mayor Kocsis denied personally knowing the contractor despite the district having awarded his company numerous demolition works, including the 2011 demolition of the market at Teleki square for a reported HUF 35 million (USD 160,000).

After 444.hu picked up the story, the District VIII Management Center Zrt. (Józsefvárosi Gazdálkodási Központ Zrt. – JGK) sent 168 óra a statement claiming that the local government had obtained the necessary demolition permits before contracting with a company by the name of Hufer-Bau Kft. to demolish the building, pointing out that the latter had the right to use subcontractors to perform up to 50 percent of the work without notifying the local government. (It is not clear which half of the building Jon Bau Kft. was contracted to demolish-ed.)

According to the statement, JGK received a number of complaints from local residents and for this reason even called on the contractor to resolve the problems.

The statement also called on 168 óra to “remove misleading insinuations from the title and content of the article,” and threatened legal action if it failed to do so.

On the basis of the JGK statement, 168 óra concluded that there was nothing misleading about either the title or content of the article.