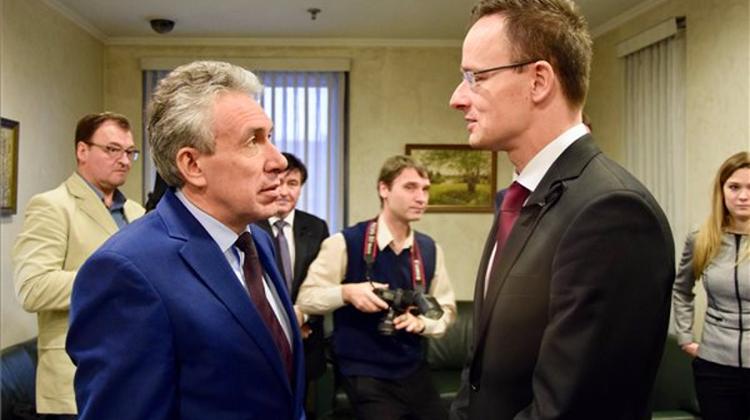 During the talks, Szijjártó noted that international sanctions had seriously impacted relations between Hungary and Russia, but business cooperation was “doing well” in terms of regional cooperation projects, as well as in Hungarian farm technology and engineering projects in Russia.

The officials also reviewed implementation of agreements reached at a meeting between Putin and Hungarian Prime Minister Viktor Orbán a year ago. Lavrov expressed his sympathy over a recent bus crash in Italy in which 16 Hungarians died.

At a press conference following the talks, Szijjártó urged quick reconciliation between the EU and Russia.

“Unless the EU and Russia negotiate for pragmatic and close cooperation, the EU will suffer serious drawbacks in the international economic and political race,” he argued. Concerning bilateral relations, Szijjártó said that “after a long interval”, international trends were again in favour of Hungary-Russia ties.

Lavrov said the Hungarian side had confirmed its commitment to implementing the upgrade of Hungary’s Paks nuclear plant in cooperation with Russia’s Rosatom. Lavrov said the Putin- Orbán talks scheduled for Feb. 2 would focus on restoring vigorous trade relations.

He said that the Russia-Hungary inter-governmental committee was instrumental in that process, adding that the body would next meet in Moscow.

The situation arising from the inauguration of the new American president was also an important item on the agenda.

“It appears that with the new US administration, a bilateral approach in relations will take over from a multilateral one, and if the US starts building relations in the world on a bilateral basis, if China constantly strengthens and the EU is incapable of building pragmatic cooperation with Russia, then the EU will certainly lose out, and the fallout from the existing ties with Russia will be more serious on the European side,” Szijjártó said.

He added that whenever there had been conflicts between the West and East, it had always been central Europe that suffered.

Therefore it is clearly in Hungary’s interest that East and West should work together, he said. “It is in Hungary’s clear interest that close and pragmatic cooperation should emerge between the new American administration and Russia, based on mutual trust, as quickly as possible,” he said, adding that whoever speaks in such terms in the European Union is branded as either a “Putinist” or a “Trumpist”.

“I’d like to at last break away from this insulting, simplistic and damaging approach and see that it is in Europe’s interest to normalise relations with Russia,” he said. “It is in both Hungary and Russia’s interest to defeat terrorism and create stability in the Middle East, as well as to take action against the persecution of Christians,” Szijjártó said.

Lavrov said the talks in Moscow had been “practical, in perspective, friendly and very substantive”. He said that bilateral ties were equal and kept in perspective each other’s interests.

Szijjártó announced that Russia will be guest of honour at a Budapest travel expo held in March, and a public space in Budapest will soon be named after Lev Tolstoy where a memorial is to be erected to the Russian writer.

Also, an agreement will be signed on renovating Russian orthodox churches in Hungary during Putin’s visit.