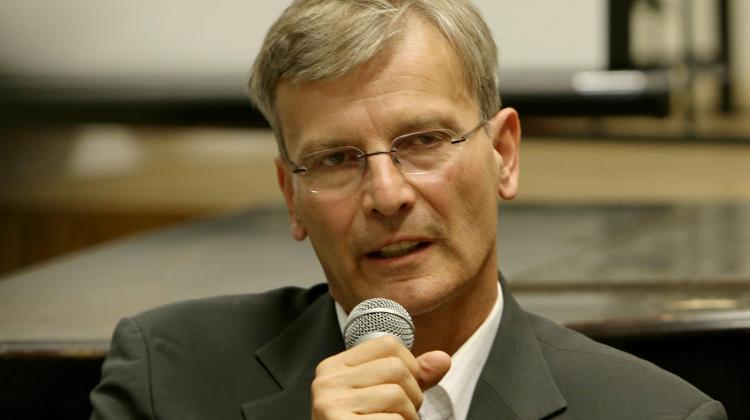 The former liberal mayor of Budapest, Gábor Demszky, is expected to appear before a parliamentary committee investigating corruption surrounding the construction of the city’s fourth metro line, Demszky’s lawyer told daily Magyar Nemzet, claiming the former mayor had nothing to hide.

György Magyar said that Demszky’s legal responsibility was not at issue in the matter. The contract for building the fourth metro line was not signed by the metropolitan council but by the companies involved.

Political responsibility should be distinguished from legal culpability. Anyone who claims, based on the report by Europe’s anti-fraud office OLAF, that Demszky bears criminal liability violates the law, he said. Socialist lawmaker Csaba Horváth, who was deputy mayor for Demszky, told the paper that he would also be ready to give evidence to the committee if invited to do so.

He likewise insisted that the metro 4 project had not fallen within the metropolitan council’s competence. Erzsébet Gy. Németh, now a lawmaker for opposition Democratic Coalition (DK) who at the time was a Socialist councillor, told the paper that she would not attend any committee hearings because the report had not raised any question of her liability in the case.

DK leader and former Socialist Prime Minister Ferenc Gyurcsány has also decided to stay away from the hearing, the party’s spokesman said. Zsolt Gréczy argued that OLAF’s report indicated that members of the then incumbent government were not implicated in the case.

Meanwhile, Socialist Party MEP Tibor Szanyi has called on the head of OLAF to clarify certain parts of the office’s report on the metro 4 scandal. “The Orbán government is using the Hungarian media ... to abuse the grave shortcomings of the report,” Szanyi said, calling on OLAF chief Giovanni Kessler to clarify and elaborate on “the many blurry statements” in the report “in order to prevent it from becoming ... a propaganda tool of the government”.

Szanyi said the report, while naming officials, business people and lawyers as persons bearing legal culpability in the scandal, had failed to disclose any actual names with the exception of former Socialist Prime Minister Péter Medgyessy. But even Medgyessy’s role is not made clear, he said.

Szanyi also criticised the report for failing to establish a timeline for the project, which he said left unclear when the various abuses had taken place. Szanyi said there were a number of formal errors, contradictions and even handwritten corrections in the report, which he said gave the impression that it had been compiled under pressure in order to meet a strict deadline.

The current city leadership is totally unaffected by the findings of the OLAF report, Budapest Mayor István Tarlós told commercial broadcaster Lánchíd Radio. He said that with a single exception, all the findings of the report related to the period before the 2010 general election.

The gravest issue concerns the contract for Alstom trains concluded before the 2006 elections, he added. “I don’t believe there’s anything to discuss,” Tarlós said, adding that the single exception after 2010 related to the replacement of the supervising engineer.

The mayor expressed surprise over the declaration by Demszky’s lawyer that the former mayor had had nothing to do with the matter when no one had raised any suspicions. Tarlós said he did not wish to make any accusation that Demszky “might bear any substantive or certain liability, but his behaviour can be considered strange.”