Fungarian: The Woman With The Palm Leaf In Budapest 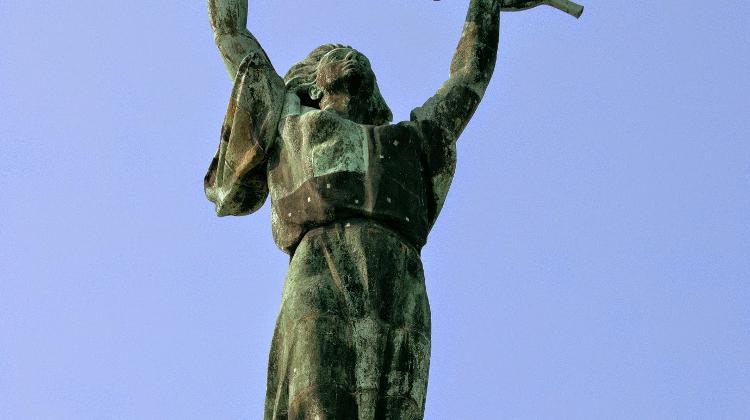 This iconic landmark of Budapest panorama was unveiled seventy years ago, on April 4 1947. The memory of celebrating April 4 as an official holiday until 1990 is kept in Hungarian collective consciousness mainly through Communist songs composed for the event, like ÁPRILIS 4-RŐL SZÓLJON AZ ÉNEK (‘the song should sound about April 4’).

The idea of commemorating the victory of the Red Army on Hungarian soil came from Soviet marshal Voroshilov, head of the Allied Control Commission in Hungary and renowned sculptor Zsigmond Kisfaludi Strobl was commissioned by Parliament to create this symbol of peace.

Originally, the woman figure holding a palm leaf was only the major component of a collection of statues comprising a Soviet soldier with a rifle and until 1992 the monument was called FELSZABADULÁSI EMLÉKMŰ (’liberation monument’).

The controversy around the name ’liberation’ after the change of system in 1989 almost lead to the removal of the whole monument since the Red Army’s arrival on Hungarian soil was re-evaluated as the occupation of the country.

A rare compromise of renaming it SZABADSÁG SZOBOR (’liberty statue’) saved the woman figure, while the Russian soldiers were removed and taken to the Memento Park, a ghostly depository of Communist time statues in Budatétény.

Apart from the name of the statue meaning liberty or freedom, foreigners need to struggle with the pronunciation of SZABADSÁG in two more incidents, SZABADSÁG HÍD (‘Liberty bridge’) actually a reference to the of the discredited FELSZABADULÁS (liberation of Budapest in 1945), since it was renamed so after its reconstruction in 1946 replacing the original name Franz Joseph bridge.

The name of another important sight, SZABADSÁG TÉR (‘Liberty Square’), however is named so to commemorate the 1848/49 Revolution and War of Independence against the Habsburgs.