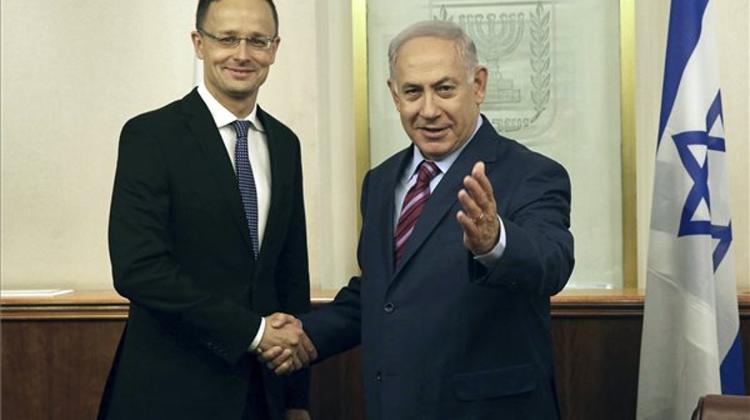 Foreign Minister Péter Szijjártó was scheduled to meet Israeli Prime Minister Benjamin Netanyahu in Jerusalem on Thursday afternoon. Szijjártó told MTI by phone that the agenda of their meeting includes settling details of a visit by Netanyahu to Hungary on July 18- 19.

He added that the Israeli prime minister will also meet leaders of the three other Visegrad Group member states (Czech Rep, Poland and Slovakia) in Budapest.

Following his talks with Netanyahu, Szijjártó will meet in Tel Aviv Eli Cohen, the economy minister, and Yuval Steinitz, the energy minister, to discuss opportunities for bilateral cooperation. “Hungary and Israel are key political, economic, and scientific allies,” Szijjártó said.

He noted that turnover of bilateral trade was worth over 500 million dollars, adding that the Hungarian government has set up a credit line of 510 million euros to further boost business ties. Concerning business cooperation, Szijjártó said the manufacture of autonomous cars, water management and the Hungarian purchase of Israeli gas would be high on the agenda.

He added that cooperation with Israel could help Hungary become a European centre for developing and testing autonomous vehicles, especially in light of the test track now being built in Zalaegerszeg, in south-west Hungary. On the subject of water management, Szijjártó said Budapest’s municipal waterworks will launch a project with Israeli partners in July to develop water purification systems.

Touching on Hungary’s energy supplies, Szijjártó noted Israel’s huge natural gas reserves discovered in 2010. Israel can play a crucial role in energy security in Hungary and the whole of Europe once Israel starts tapping the reserves in 2019 or 2020, he added.

Szijjártó also expressed support for intensifying relations between the European Union and Israel, as well as for the peace process in the Middle East. Hungary is ready to help towards achieving a two-state solution based on direct talks, he added.