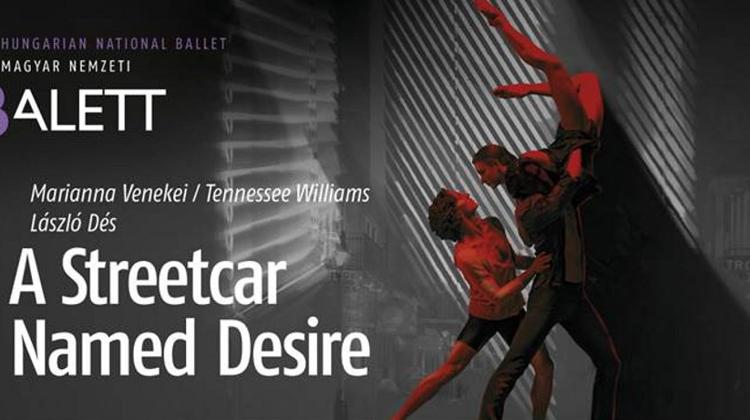 The final premiere of the 2016/17 Hungarian State Opera is an exciting world premiere. Tennessee Williams' most acclaimed work, A Streetcar Named Desire is transformed into a modern dance drama on the stage of the Erkel Theatre. It is also principal ballet master Marianna Venekei’s first full-length choreography.

The project, lovingly nurtured for many years, is a collaboration between Venekei and composer-saxophonist László Dés.

Using the means of modern ballet, its creators evoke the atmosphere, sights and music of the New Orleans of the 1940s, the time and setting of Tennessee Williams’s original work, in a production driven by the sheer variety of the musical and dance motifs, and the unique personalities of the characters.

The story of the fall of Blanche DuBois is a drama of family bonds, unrequited love, acceptance and physical force that never loses its relevance.

“Any of us can become Blanche,” Venekei states, meaning that we can find ourselves in a hopeless situation from which it is impossible to get out. A single bad decision that seems necessary can make everything around us fall apart.

A Streetcar Named Desire is a shockingly dramatic story because each character wishes to do right in their own way, but in most cases only succeed in ruining each other’s lives.

This world premiere at the Erkel Theatre promises to be a worthy closure to the 2016/17 Hungarian Season.

The permission of the copyright-holder was obtained through the intermediation of Hofra Kft. (www.hofra.hu).