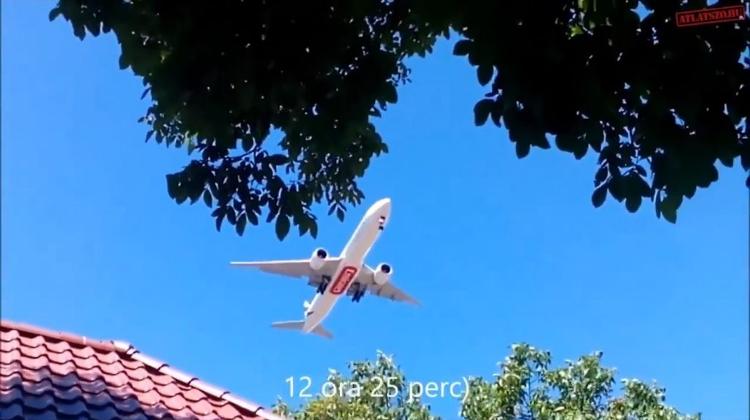 Life in the southern suburbs of Budapest, near Budapest Airport, is noisy and unhealthy. Planes taking off and landing make sleep at night impossible. At certain areas, the noise created cracks in walls and some people stay indoors all day in order to avoid kerosene drizzling from the sky. The problem affects hundreds of thousands of people who have been fighting the airport in courts for years – unsuccessfully.

People living close to the airport are starting to give up and some of them no longer trust that the courts will help them. Octogenarian ladies told us that if they had the ability to do so, they would use physical force to ‘end this nightmare.’

‘We have tried every legal possibility, we have negotiated with governments of different political parties, ministry officials, authorities and many managers of Budapest Airport. We had very little success, but I am convinced that it did not depend on us’ wrote the mayor of one of the districts affected by the noise in a closed Facebook group. S/he comes from the governing Fidesz party.

The problem started decades ago when the second runway was built only 1.6 kilometers far from the nearest houses when the regulations actually set a 5-kilometer minimum. In 1984 a government minister listened to the noise and banned the use of the end of the second runway that was close to the city.

The change came in 2004 when the state decided to privatize the airport. At the same time, new regulations allowed the use of that end of the runway again and also allowed 55 percent of the air traffic to pass through the city. This means that even districts that are far away from the airport (such as Zugló) have an air corridor above them.

It is possible that loosening the restrictions was necessary for the rapid expansion of the airport that happened in the past decade – and thus it was also necessary to negotiate a better price during the sale.

The people and municipalities affected by the changes started several lawsuits in the past few years. The latest started in 2014 recently ended in an appeals court with a decision favoring the airport. During the lawsuits, many important details came to light.

One of the most important of these is that the authority responsible for environmental protection gave its blessing to the airport and its operations in 2013 without the airport complying with all necessary regulations. According to the latter, the airport has to examine the noise and pollution levels and draw up ‘noise protection zones.’

This actually means that in the most affected areas people are entitled to financial compensation and help from the airport. But if you the airport does not even do the research and designate these zones, then, obviously, nobody will be entitled to compensation. This is the best scenario for the airport management and this was the case for a very long time.

It is ironic that at the same time authorities in the past decade have many times said that they cannot do anything for the people complaining because the noise protection zones are not drawn up.

In February the European Council sent a letter to Hungary, urging the government to create the airport and railway noise maps and actions plans that are required by EU law (2002/49/EK) aiming to reduce noise. The letter argues that after air pollution the second most common cause of early death is noise pollution by road, rail and air traffic.

The Council sent a warning letter in April 2016, but the Hungarian government still has not created the strategic noise maps of suburban Budapest. According to the February 2017 letter, Hungary got an extension and has time to comply until August 2017. If nothing happens by that time, the EC is going to court.