Direct Flights From Budapest To New York & Chicago Launch In 2018 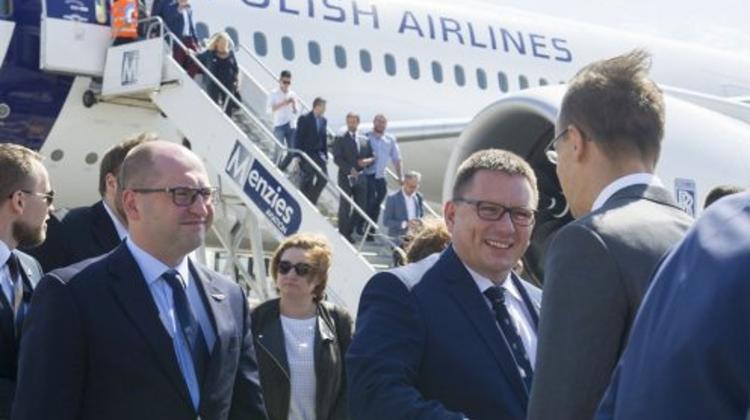 Polish airline LOT will be launching direct passenger flights to New York and Chicago from Budapest next summer, Minister of Foreign Affairs and Trade Péter Szijjártó announced on Friday in Budapest, highlighting that the fact that there is no direct link to the United States, despite it being the second largest investor in Hungary, represents a competitive disadvantage for Hungary.

The Minister of Foreign Affairs and Trade pointed out that the some 1700 thousand American companies operating in Hungary maintain a hundred thousand workplaces, and trade flow between the two countries exceeded 5.5 billion dollars last year.

Mr. Szijjártó said he believed the new air passenger routes also reinforce Visegrád cooperation, while Polish Deputy Prime Minster Mateusz Morewiecki stressed that there are common paths in Hungarian and Polish economic development, and the new air route also serves this purpose, adding that the two countries would like to further diversify their economic relations and attract increasing numbers of investors to the region.

CEO of Budapest Airport Jost Lammers said 160 thousand potential passengers-a-year were expected on the market. CEO of LOT Rafal Milczarski told reporters that flight to New York would take off on Mondays, Thursday, Fridays and Sundays, and return to Budapest the day after, while flights to Chicago would leave on Tuesdays and Saturdays.

According to plan, flight to both cities would leave at around midday and return to Budapest at 9 a.m. on the following morning. LOT’s Boeing 787 Dreamliner will be used on the new routes, and will be stationed in Budapest, while the Polish airline may also be willing to employ Hungarian aircrew to serve on the flights.

The airliners are capable of transporting 12 tons of goods and will take off from Budapest for the first time on 3 May next year. LOT’s Boeing 787 airliner visited Budapest to mark the announcement, and was greeted at the airport by water-spraying fire engines.

There has never been a direct flight between Budapest and Chicago, and direct flights to New Work were last operated by American Airlines in 2012, but were withdrawn from the Hungarian market on 28 October of that year after Hungarian airline Malév went bankrupt in February.

There has since been no direct air passenger route between the two cities.