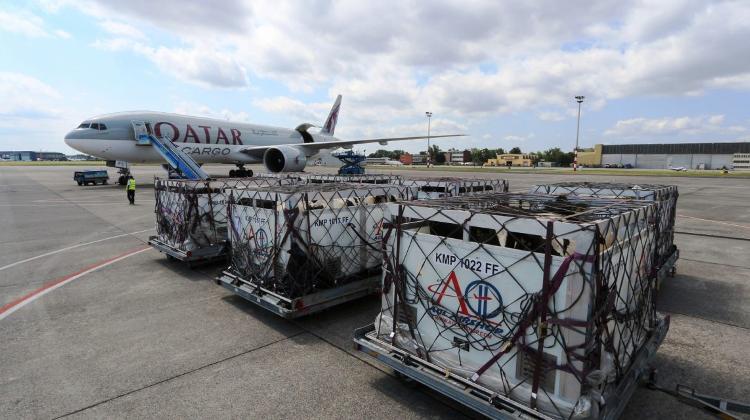 Another extraordinary livestock cargo left Budapest Airport: this time, Hungarian pedigree calves were taken to Qatar in the Persian Gulf for further breeding. The special cargo was carried by a Boeing B-777F operated as a charter flight by Qatar Airways Cargo, Budapest Airport offical site said.

Calves were staring in awe at the Boeing 777 of Qatar Airways while being prepared for the flight at Ferenc Liszt International Airport. Loading of the high-value and rather sensitive cargo consisting of breeder calves from a Hungarian breeding farm requires proper care and expertise.

Calves must not be left out in the scorching sun to wait, and so they have to be brought to the airport early in the morning on the day of the planned flight.

These tender animals are not possible to safely transport either by train of boat. One carriage box accommodates four calves standing in it weighing more than a hundred kilograms each preventing them from any injuries even if they get scared during the flight. The mobile cattle grids were lifted one after the other on board and were fixed tightly for transit right away.

“Fortunately, this special livestock cargo was not the first one for Budapest Airport; we have dispatched several ‘cattle charters’ from Ferihegy to the countries of the Middle East, or to the Pacific coast of Russia, like last time, for instance,” said René Droese, property director of Budapest Airport.

The director also responsible for the cargo business added, “Qatar Cargo operates three scheduled flights per week between Doha and Budapest with Airbus 330-200F cargo planes, but this charter plane, a Boeing 777 has about 60% more cargo capacity, and we do hope to see it more often at our airport going forward due to the dynamic increase of cargo volumes carried by the airline.”

Over the years almost all kinds of live animals were successfully handled at Budapest Airport in cooperation with Celebi Ground Handling providing ground service to such flights. For completion of the delivery, close cooperation was also absolutely necessary between authorities, the breeder, animal health experts, and the customs authority.