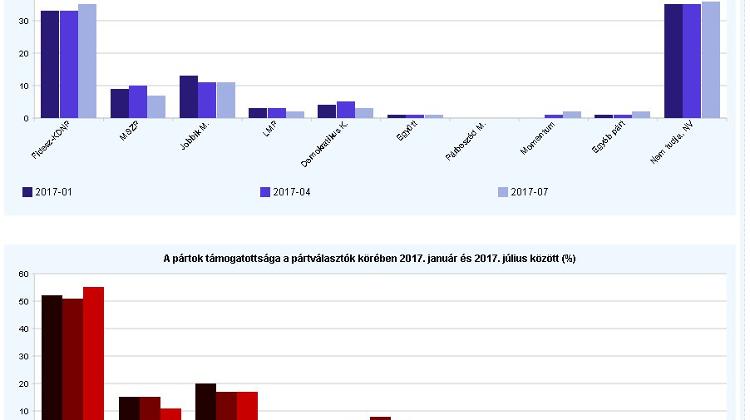 Support for the ruling Fidesz - Christian Democrat alliance increased while for three opposition parties weakened in the second quarter of the year, a fresh poll released by the Tárki Research Institute showed.

Radical nationalist Jobbik’s backing remained unchanged at 11% among all voters and at 17% among decided ones.

Support for the Socialists dropped by three percentage points to 7% among all voters and by four points to 11% among decided ones.

The leftist Democratic Coalition’s support dropped by two points to 3% in the whole sample and by three points to 5% among decided voters.

Együtt and green LMP had support by 1 and 2% of all respondents and by 1 and 3% among decided voters, respectively. The Dialogue party failed to reach the 1 percent mark.

Tárki gauged opinion for new opposition party Momentum for the second time and showed its support going up one point to 2% among all respondents and to 3% among decided voters.

Tárki said that around 35-36% of respondents were unable or unwilling to indicate a party preference, unchanged since the April poll. The representative poll was conducted on a sample of 1,017 people between July 14 and 23.