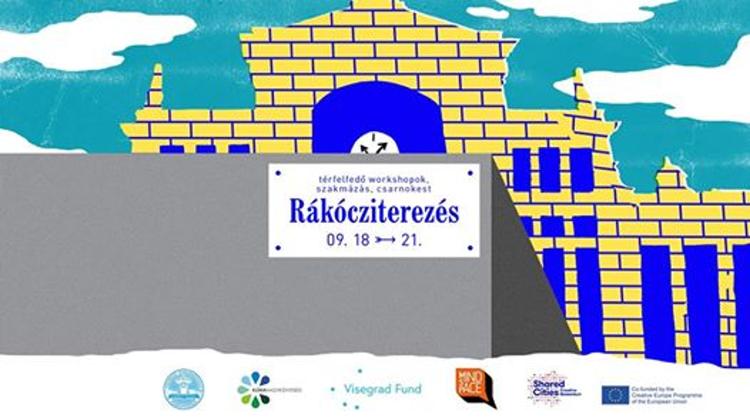 A four-day workshop conference and happening about Rákóczi square, at Rákóczi square with people from Rákóczi square.The construction of the 4th metro line started in 2006. Due to the prolonged works, the neighbourhood lost plenty of its liveability, the market hall became abandoned and square was only used for bypassing.

Finally the construction ended and it turned out that the exit of the metro fully covers the view of the market hall so it became almost invisible from the boulevard.

In the last couple years, bottom-up initiatives started to give momentum to the neighbourhood. A unique blend of African hairdressers and bars, creative small enterprises, galleries, shops, underground cafes and the endless line of local craft stores give it a special local taste. In September we will make an attempt to use creative small scale interventions to make Rákóczi square a better place.

For four days we will operate a pop-up print shop, a serigraph workshop, organize an exhibition in the hall where the map of the neighbourhood, apron of the butchers and the boxes of the farmers will be created. The workshops will be crowned with a professional conference and an evening event session, happening at the hall. Here we will present the creations of the week, what happens in other parts of the world with other spaces, halls and altogether how is space defined and how does it sound.

21 September 18.30-20.30 - Hall evening session
When vendors close their stands, we start a new type of market. We present our temporary workshops, the Rákóczi creations made during the week and ideas about space as such. From space expansion to agoraphobia.

Presentation combined with performances located in the stands of grocers and butchers, scattered in the labyrinth-like spaces of the hall. The variety ranges from folk music through contemporary dance performance to experimental electronics, so together in this huge space with special acoustics they create an unusual sound experience that has never been heard before.

21 September. 10-16 - New Lumen - Professional conference
It is a very rare case when the economic sector, decision makers and professional organisations co-create urban ideas that are sustainable on the long term. How can we combine bottom-up initiatives with topdown solutions in a cooperative manner. Refreshing urbanism, idea-generating presentations, international guests.

The event is organised by Mindspace and Climate Embassy Association in the frame of Smart City Budapest Initiative and funded by the Visegrad Fund.

Working with the city (cooperation with institutions) program is part of Shared Cities: Creative Momentum project, which is a European cultural platform addressing the urban challenges of contemporary European cities. In an international cooperation of 11 partners from six different countries numerous events, programmes and researches will be implemented between 2016 and 2019.

The project is co-funded by the Creative Europe Programme of the European Union, the Hungarian partners are Contemporary Architecture Centre and Mindspace.