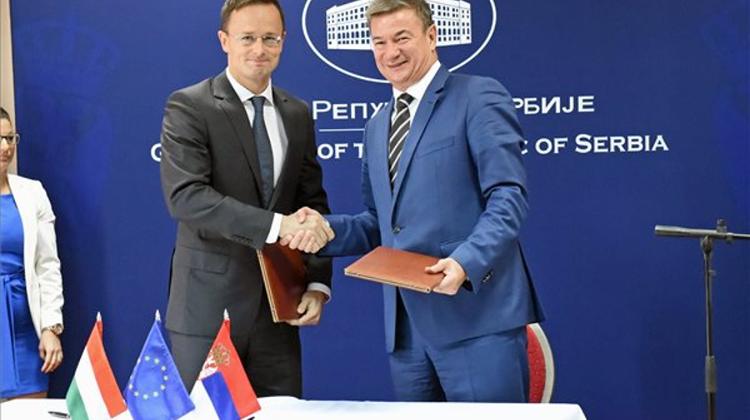 Hungary has the best diplomatic and economic relations with Serbia out of all its neighbouring countries. Serbia is also Hungary’s top economic partner in the western Balkans, Péter Szijjártó, the foreign affairs and trade minister, said after a meeting of the Hungarian-Serbian mixed economic committee in Subotica (Szabadka).

The committee discussed the upgrade of the Budapest-Belgrade railway line, the construction of a Szeged-Subotica-Baja railway line, the opening of new border-crossing points between the two countries, the expansion of economic and trade relations as well as the development and connection of Hungarian and Serbian gas pipelines.

Szijjártó, the Hungarian chair of the mixed committee, expressed the ethnic Hungarian minority, and said Vojvodina’s Hungarian community was a binding rather than a divisive factor in the two countries’ relations. The minister said the two countries signed several agreements that would boost bilateral trade, including a deal to open two new border-crossing points in 2018.

Hungary and Serbia will receive 3 million euros in European Union funds to design the Szeged- Subotica-Baja railway line, Szijjártó said, adding that both sides hope that construction can get under way immediately after the plans are completed.

Both Hungary and Serbia have signed cooperation pacts with Russian state-owned gas giant Gazprom, under which a gas transport corridor is expected to be established by the end of 2019, which will contribute to improving energy security for both countries, the minister said.

This pipeline will be able to supply gas flowing through the Turkish Stream pipeline to Hungary via Bulgaria and Serbia, Szijjártó said, adding that by 2019, infrastructure with capacity to receive 6 billion cubic metres of gas will be created on the border between Hungary and Serbia.