All You Need To Know About Reconstruction Of Metro Line M3 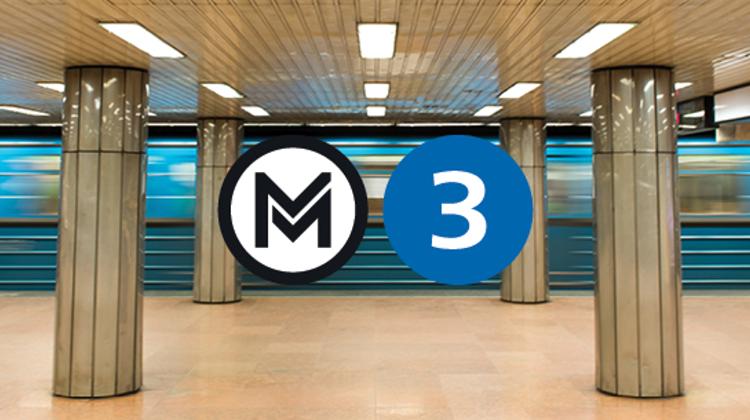 From the beginning of November 2017, metro line M3 will be closed for reconstruction between Újpest-Központ and Lehel tér stations while on the rest of the route the metro will be in service from the first morning departure until 20:30 between Kőbánya-Kispest and Lehel tér. After 20:30 on workdays and all weekend, the whole metro line will be replaced by buses. For travelling between Újpest-Központ and Lehel tér, the metro replacement bus and tram services as well as other bus lines serving the metro stations in the area but diverted from Váci út are recommended.

The closed metro stations of the route section between Újpest-Központ and Lehel tér will be served exclusively by the most modern, articulated low-floor replacement buses. Some buses will run all the way to Árpád Üzletház to provide a more convenient service to passengers from Újpest residential area.

The prioritised operation of the replacement buses will be supported by traffic technology measures, such as designated bus lanes, and also a fleet of reserve buses will be at the ready to enter into service, if needed. In peak times, buses will have a frequency of 45 seconds on average, but their operation will be naturally affected by the peculiarities of surface transport, thus journey times will be longer than on the metro.

BKK provides increased fixed-rail services in North Pest. Tram 12M with three tramcars will run as metro replacement to Lehel tér on workdays instead of tram 12. Tram 14M, instead of tram 14, will run more frequently and with higher capacity at weekends, too.

Thus from North Pest, tram lines 12-14 offer shorter journey times to the city centre with combined 3-4 minute peak-time frequencies. The tram journey time between Lehel tér and Újpest-Központ will be reduced 2 minutes thanks to the reprogramming of traffic lights. Passengers are not required to validate a new ticket when transferring between the metro and the metro replacement tram.

From the Vörösvári út, Bécsi út area, trams 19 and 41 are best to reach the city centre while from the northern parts of the district and Szentlélek tér area suburban railway line H5 and metro M2 are the fastest options. From Óbuda, buses 34 and 106 are extended to Lehel tér to provide access to the metro.

Buses 5 and 7E from Rákospalota and Újpalota will run more frequently, and buses 25 and 225 to the M1 metro terminus at Mexikói út are also recommended.

Boat line D11 in service between Újpest and the inner city departs Újpest in the morning peak hours every 30 minutes.

The Municipality of Budapest, BKK and BKV Zrt. have done and will do their best to ease traffic during the reconstruction period, it is important to note, however, that journey times will increase 10-15 minutes regardless if passengers opt for replacement services or any other transport mode.

During the M3 reconstruction, replacement buses will be operating on workdays after 20:30 and all weekends on the full length of the metro line via Árpád Üzletház–Újpest-Központ–Kőbánya–Kispest.

The reason for the full replacement of the line in off-peak hours is for reconstruction work to proceed as quickly as possible, so that this major transport development project can be completed to provide a modern line along with renovated stations to be served by refurbished metro trains.

Where to purchase tickets and passes

BKK provides convenient ticket purchasing options even during the reconstruction period. Some ticket vending machines (TVMs) located at closed metro stations will be relocated to replacement bus stops while the rest of the TVMs will be deployed at major transfer hubs along the alternative routes.

BKK would like to advise passengers that no ticket sale by bus drivers will be offered aboard replacement buses to ensure smooth operation. Passengers are kindly asked to purchase their tickets in advance. The BKK sales point finder is available at www.bkk.hu/pontkereso, where searches for location or opening hours will display the nearest customer service centre, ticket office or TVM. Additionally, the nearest ticket purchasing option will be displayed at each replacement bus stop.