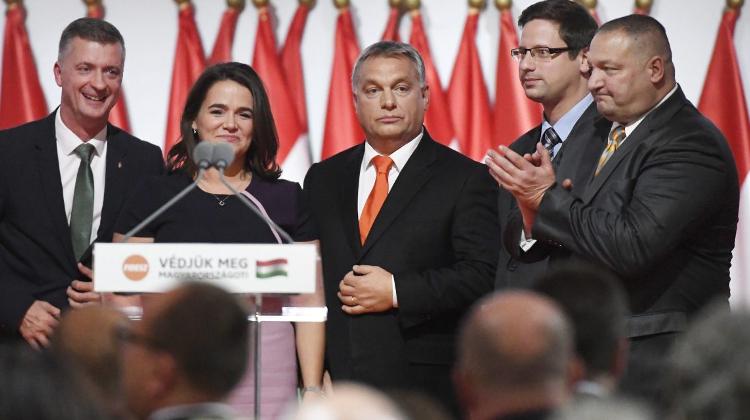 Hungary’s ruling Fidesz party held its 27th congress in Budapest on Sunday to elect its senior officials and set priorities for the future, including defending Hungary’s sovereignty and preparing for next year’s elections. Addressing the congress, László Kövér, a founder of the party and head of its national board, said the general election scheduled for next spring would be crucial.

“The ballot’s stake will be whether we are able to defend what is ours, what we have fought for,” he said. “We must defend our culture, faith, language, identity, Hungary’s sovereignty, the right to self-determination and its national character,” Kövér said. Kövér, who also serves as Speaker of Parliament, stressed the need to defend the continent’s borders, its freedom and democratic order.

Hungary’s 2018 election would therefore be of “European significance,” he said. Europe today is “the scene of a battle fought for global domination with political, economic and ideological weapons . with Hungary being one of the last strongholds of normality, perhaps the strongest one,” he said.

“If we are unable to defend Europe, the chance for the continent to preserve its multicultural character will be slim,” he said.

Foreign Minister Péter Szijjártó said Hungary’s independent foreign policy gives priority to protecting national interests and Christian values, which he said are exposed to the biggest threat in Europe. Szijjártó called it “alarming” that western European countries had adopted a series of decisions to guarantee that there should be more illegal immigrants and the fewest possible Christian symbols maintained on the continent.

“Those who wish to establish a United States of Europe want the demise of Europe and of all European nations,” he said. Szijjártó noted that over the past two years all effective responses to the European crises had been given by nation states rather than by Brussels.

“It was not Brussels that halted the migrant wave but Hungary that built a fence along its southern border and showed that illegal migration, this astounding threat to Europe can be contained,” he said. Gergely Gulyás, Fidesz’s group leader whom the congress re-elected as deputy chairman, said Fidesz was leading a country that was a “safe, stable and developing island” in a crisis-hit world. “In order to preserve this situation the only option for us is to win next spring’s election with a comfortable lead for an unprecedented third time in a row,” he said.

Gulyás said that the leftist opposition parties now hate one another more than they hate Fidesz which “gives the ruling party not more power but more responsibility towards the nation”. János Lázár, the government office chief, said that achievements by Fidesz as a ruling party “had entitled” it to win the general election next year. Fidesz is prepared to continue to govern, Lázár said, noting that hard work and progress had marked the past eight years over two government cycles.

He said the stake of next spring’s general election would be whether a party would be elected into power that defends Hungary’s sovereignty and borders or one obeying Brussels.

“But the real threat does not come from the Hungarian opposition, but from abroad,” Rogán said, identifying as a source of the threat US billionaire George Soros “who has a plan” and “whose empire is attacking all values” that are important for Hungary.