Opinion: Dress Rehearsal For The National Election? By-Election In Solymár 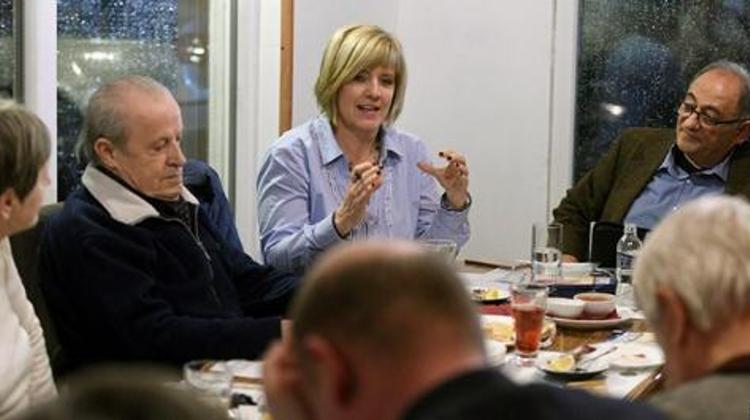 On December 10, a local by-election for a seat on the town council was held in the sixth district of Solymár, a suburb of Budapest, which is described in its English-language Wikipedia entry as “a desirable destination for affluent city-dwellers moving to suburban homes outside of Budapest.”

The extremely detailed Hungarian Wikipedia article portrays the small town of 10,000 as a bustling, culturally active community where there is a strong attachment to the German traditions that became nearly extinct with the deportation of a great number of indigenous German inhabitants of Solymár.

The list of prominent writers, artists, and politicians who are associated with the town is impressive. Some well-known people from the right also seem to favor the place. The anti-Semitic leader of MIÉP, István Csurka, used to live there and Zsolt Bayer is still a resident.

Solymár is known as a Fidesz town through and through, a designation that is well-deserved, at least since 2006. Solymár has had a Fidesz mayor ever since that time, and all eight electoral districts of the town elected Fidesz-KDNP candidates. MSZP-DK, Jobbik, and Együtt-PM each received one place from the compensation list.

The contested District #6 was handily won in 2014 by Gergely Gaal with 61.96% (215 votes) over MSZP-DK’s candidate with 27.67% (96) and Jobbik’s with 10.37% (36). A by-election had to be held because Fidesz-KDNP chose Gaal to replace György Rubovszky, a long-standing member of parliament (KDNP) who died in June. Gaal joined the Christian Democratic caucus, which represents a political formation that actually doesn’t exist.

All of the left-of-center opposition parties, including LMP and Momentum, two parties that are dead against any kind of cooperation with those they find politically unacceptable, decided to throw their weight behind an independent candidate, Zsuzsanna Kárpáti, a photographer who is well known and well liked in town. Jobbik decided not to enter the race, which was interpreted as a tacit endorsement of Kárpáti.

Some of the independent media outlets heralded the event as “the dress rehearsal” for the national election next year. 24.hu considered the by-election in Solymár “a great deal more important than an ordinary by-election.” Having “only one competitor against the Fidesz candidate” is the sole formula by which Fidesz can be beaten. Magyar Nemzet also looked upon the Solymár by-election as a “litmus test” for next year’s election.

The election duly took place yesterday, and Attila Dalos, the Fidesz-KDNP candidate, won, receiving 225 votes (56.8%) against Zsuzsanna Kárpáti’s 169 votes (42.7%). The government propaganda machine was ecstatic. Magyar Idők interpreted Kárpáti’s loss as “a slap in the face to opposition cooperation.” The victory, in the opinion of the right, was “a win hands down.”

Gergely Gaal, whom Attila Dalos will replace as a member of the town council, interpreted the figures as proof that “the government parties have actually become stronger in Solymár” in the last three years. I predict a great career for Gaal in national Fidesz politics because his claim that Fidesz-KDNP has become stronger since 2014 when “Fidesz-KDNP received 55.6% and now 56.8%” is simple hoodwinking. Solymár is part of the Electoral District #2 of Pest County where Fidesz received 46.54% of the votes at the national election of 2014. Solymár with its 55.6% of Fidesz votes in the 2014 national election shows that Solymár is a Fidesz stronghold in District #2.

Gaal is comparing apples and oranges when he compares municipal election figures to the numbers in the national election in order to portray the by-election as a great victory. The fact is that although the Fidesz-KDNP candidate won, the earlier overwhelming support for Fidesz (61.96%) in the local election slipped by more than five percentage points this time around. And the single challenger did considerably better (42.7%) than the MSZP-DK candidate (27.67%) in 2014.

As is usually the case, the other side finds the results encouraging. Gábor Vágó, a former LMP member and nowadays a civil activist and journalist, thinks that “Solymár shows that the national election is not a done deal.” Vágó, in comparing the figures, said that in 2014 there was a 121 vote difference between the Fidesz winner and the MSZP-DK challenger which by now “has melted to 56.” Thus, says Vágó, cooperation among the parties has a mobilizing effect on the electorate. I think that Vágó’s explanation is too simplistic.

One must keep in mind that Jobbik didn’t enter the race, and it’s not evident if its supporters turned out to vote anyway and, if so, for whom they voted. Considering that there is no love lost between Jobbik and Fidesz, they may have cast their votes for Kárpáti. In 2014 the Jobbik candidate received 36 votes. In addition, 26 more people voted this time than three years ago. All in all, it’s not obvious that the narrowing of the gap between 2014 and 2017 was due solely to party cooperation.

The socialists are also optimistic. The party believes that “if in District #6 of Solymár one can have such close results it means that Fidesz can lose in the majority of the 106 electoral districts.” After all, the argument goes, this is a super-strong Fidesz district, and therefore it is not a good indicator of future results.

The oddest assessment of the Solymár results came from Zoltán Tóth, who is considered to be a real wizard in the analysis of election laws. Unfortunately, he has a great deal less skill as a political analyst. For some strange reason he thinks that Jobbik stayed away from the fray because it wanted to help Fidesz win.

Neither the figures nor current Fidesz-Jobbik relations support this assessment. It is enough to take a look at Jobbik’s internet news site, alfahir.hu, which notes with satisfaction that “Fidesz’s advantage has been greatly reduced.”

After comparing the current and the 2014 results, the article concludes that “it is clear that a unified, independent candidate is capable of putting pressure on the Fidesz candidate even in Fidesz strongholds.” Surely, Jobbik was not on the side of Fidesz in Solymár. On the contrary.

Viktor Szigetvári of Együtt, who used to be an electoral number cruncher before he decided to become a politician, points out that only a 60% participation rate can remove the Orbán government, even if only one challenger faces the Fidesz candidate. Whether the opposition parties, whose main preoccupation seems to be fighting among themselves, will be able to mobilize those voters who are unhappy with the present government only time will tell.