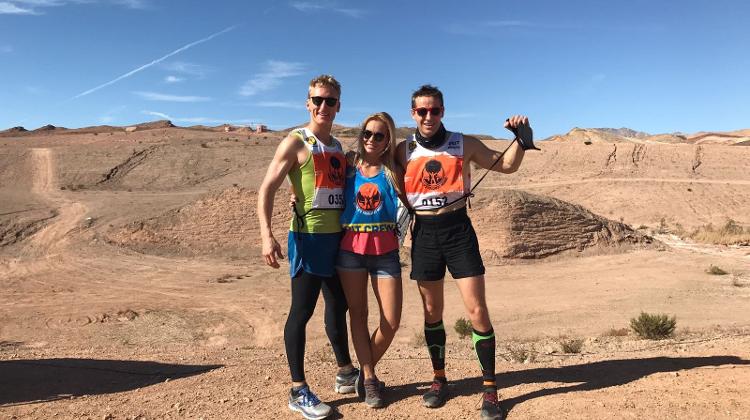 Fresh back from the Nevada desert, Budapestians Daniel Kaali and William Clothier both return with top 100 places out of 1655 competitors and 12th and 13th respectively in their age groups. Daniel managed a 58th overall finish, which although already a top 4% finish is down from his 2016 placing of 17th overall.

Daniel plans to reassert his place in the sport’s top ranking placing by taking on the inaugural Spartan Ultra World Championship being held on the dramatic cold rugged landscapes of Iceland on December 16-17th.

Daniel reports: “This year’s World’s Toughest Mudder was the hardest yet having completed all but one of the WTMs held to date since 2011. There were even tougher distance penalties for not successfully completing obstacles making each 5-mile lap potentially up to 8 miles long.

The 13 laps I completed (less than I was aiming for) equated to a distance covered of somewhere between 105 and 150 kilometers of actual distance covered in the 24 hours, not to mention the 200+ obstacles completed or attempted (21 per lap). But with this year’s WTM event now under my belt I feel better prepared for the Spartan World Ultra event in Iceland in a few weeks time, and look forward to competing under the glow of the northern lights!”.

The Spartan World Ultra event is in some ways billed as a replacement of the now discontinued Death Race competition of which Daniel is the title holder, winning the non-stop 3-day event in 2015. William is unlikely to join Daniel in Iceland due to a partially dislocated shoulder and a right knee injury suffered in the WTM race and is unlikely to be race fit in time for it.

William: “Temporary injuries aside, I think this relatively new type of OCR event (Obstacle Course Racing) is an interesting, fun, challenging and inclusive sport to get into. Over the 5-6 years I have been competing, it has helped me better understand what for me constitutes a complete healthy working body from a variety of perspectives, and has given me a fun format to seek new personal fitness goals long after my professional sport days have finished. After all, in the end the race is only with yourself...”

We wish Daniel all the best for the Iceland event and hope that before long Budapest can be hosting more championships of this nature and see more Budapestians on the world OCR circuit.