Viktor Orbán: Europe Needs To ‘Go Back To The Drawing Board’ 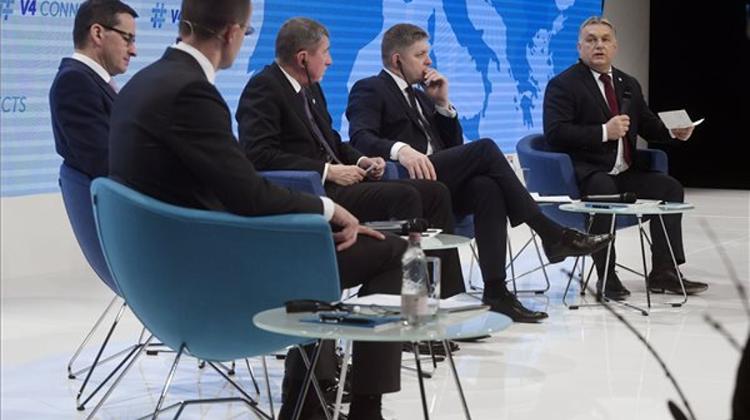 Europe “needs to go back to the drawing board” because it has failed to achieve its goals, Prime Minister Viktor Orbán said at a panel discussion with his Visegrád Group counterparts in Budapest on Friday.

“We are pro-European politicians,” Orbán said referring to himself and his Czech, Polish and Slovak counterparts.

The V4 aims to make Europe stronger, Orbán said, adding that a new plan for Europe would have to include a clause on the creation of a labour-based society.

Europe must return to the top in terms of technological development and the continent needs its own army, the prime minister said. Instead of aiming to become a “united states of Europe”, the block should be an alliance of free nations, he added.

Orbán insisted that all of this was possible and the only question was whether Europe would have a strong enough leadership to accomplish these goals.

On the subject of migration, Orbán said that the problem would grow beyond Europe; “it is clear that the debate is shifting from the European arena to a global stage, another issue Europe will have to address.”

“We will help all who need to be helped but we will not accommodate migrants; we do not wish to become a destination country for migrants,” Orbán said.

“There are dangerous things in the works at the UN,” Orbán insisted. He said the UN’s migration agenda would call for easing punishments for illegal border crossing, assigning special roles for NGOs in handling migration and call on all countries to take in migrants.

Orbán said the V4’s opposition to immigration was about the protection of Christian culture. This is not a question of religion, he insisted, arguing that Christian culture also included non-believers.

It includes a Christian way of life, the freedom of religion, the family model, the relationship between man and woman.

“We live in integration here and we do not want to import anti-Semitism,” Orbán said. “We insist on our tolerant, Christian way of life and we cannot lose the feeling of being at home.”

Orbán also touched on the importance of EU enlargement in the western Balkans. If this region can be integrated into the bloc, it will only make central Europe stronger, he said.

He said the United States, Russia and Turkey all had strategies for the Balkans, while the EU did not. If it did, Montenegro should immediately become an EU member and should quickly be followed by Serbia; if Serbia joins the EU, the Balkans will effectively be stabilised, Orbán said.

Polish Prime Minister Mateusz Morawiecki called for a strong Europe both in terms of its economy and its military capabilities made up of “sovereign states with a shared objective”.

EU members should take decisions at the national level, but constantly work with the other members and build a unified, harmonised market, he argued. Concerning military capabilities, he said that a joint army is necessary not only because of “aggression from the east, but to fight terrorism and to tackle the migration crisis, too.

Robert Fico, the Slovak prime minister, said that the Visegrád project was the “success story” of four successful countries, and called it a “pro-European project”.

Referring to criticism on the group for having a different position from the rest of Europe on certain subjects such as mandatory migrant quotas, Fico said that “just because of that they cannot push us aside, we are not black sheep”.

The Visegrád countries will incessantly fight for Europe, he insisted, but added that Europe, in turn, should listen to their voice.

Concerning the EU’s quota decision, Fico voiced resentment that the decision had been made in the council of interior ministers, “sidestepping” the European Council made up of presidents and prime ministers.

He said the highest priorities for Europe were security, migration, and the free market. He also called the V4 an “excellent project” and suggested that the group does not need to be enlarged but it could seek allies concerning certain subjects.