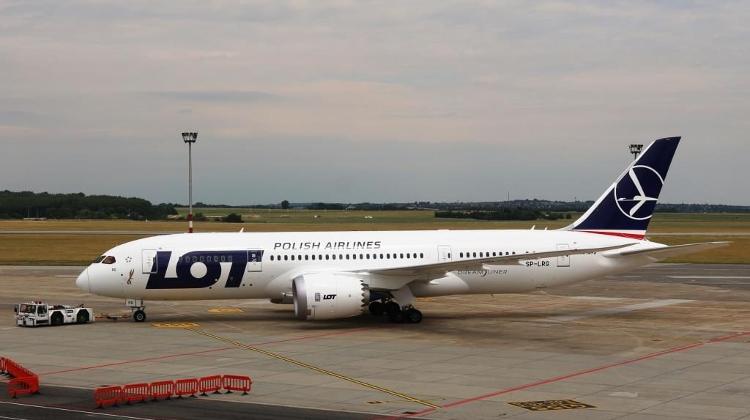 As of the end of March next year, LOT will be operating its Warsaw-Budapest route with a frequency of five flights per day. The Bombardier Dash-8 Q400 arrives in Budapest in the evening for an overnight stop and returns to the Polish capital the following morning.

Tickets for the new Warsaw flight with LOT are available on the internet.

From 25 March 2018 (the start of the summer schedule season) LOT will be operating its Warsaw-Budapest route with a frequency of five flights per day. This latest flight of the Polish flag carrier will depart from Warsaw at 19:45 and it will land in Liszt Ferenc International Airport after 1 hour 25 minutes at 21:10.

The crew of the 78-seater Canadian-made Bombardier Dash-8 Q400 turbo-prop aircraft will spend the night in Budapest, and the layover crew will fly the plane back to Warsaw at 07:00 the following morning landing in the Polish capital at 8:20. Warsaw to the max: LOT’s fifth daily flight to Budapest.

This schedule is adjusted to long-haul connecting flights operated by LOT, as quite a number of overseas destinations are directly flown from Warsaw by their Boeing 787 Dreamliners.

Thus, those who for some reason can’t make LOT’s direct Budapest-New York or Budapest-Chicago flight starting next summer will be able to reach those cities via Warsaw too. LOT’s route network includes a wide range of destinations from Madagascar through Mexico and Cuba to Indonesia.

The new fifth daily Budapest-Warsaw flight, however, will offer competitive transfer opportunities to those who are headed for the Middle East. “Budapest Airport is delighted to welcome the 5th daily flight of LOT Polish Airlines to Budapest,” said Kam Jandu, CCO of Budapest Airport.

He added, “This overnight flight will give much more travel options to passengers from Budapest who can benefit from the wide range of long-haul flights of LOT Boeing 787 Dreamliners originating from Warsaw. The new flight will create optimal travel solutions for Hungarian passengers heading to Asian countries like Japan, China or Singapore as well as LOT Polish Airlines’ growing network to the USA.”

“Hungary is one of our key markets in the entire CEE region, and we are pleased to introduce now an even more flexible and convenient schedule with five frequencies a day on the Warsaw-Budapest route. Our new offer will undoubtedly meet the demands of those passengers who are seeking comfortable flights to Poland or transfer to further destinations in Eastern Europe or Far East Asia, i.e. Singapore or Seoul.

This year alone we have introduced a non-stop service to be launched between Budapest, New York JFK and Chicago (details HERE) and we constantly observe an increasing number of Hungarian passengers who decide to take the advantage of flying LOT from Warsaw instead of transferring in overcrowded, giant hubs in Europe,” said Adrian Kubicki, Director of LOT Corporate Communications.