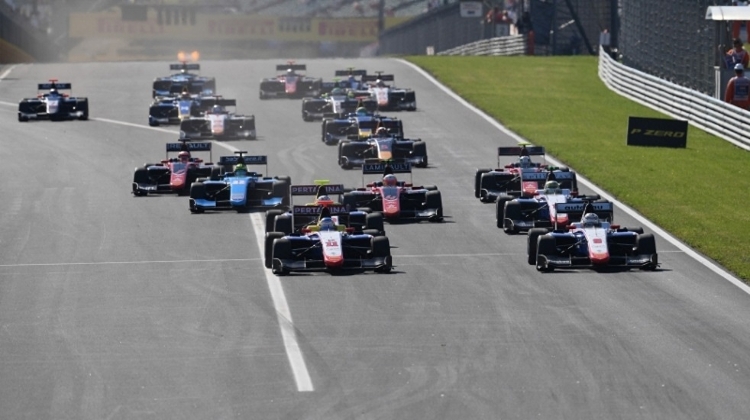 Classical. This is what it has become over the past years, the race track Hungaroring. It was built almost three decades ago as a rarity, the first one beyond the Iron Curtain, and now it is still special as the third behind Monte-Carlo and Monza to have continuously featured in the race calendar.

From the organisers: Hungaroring is preparing for the 33th Hungarian Grand Prix, and for this occasion perhaps a little nostalgia is allowed, recalling the victory of Nelson Piquet at the first race held here – in front of three hundred-thousand (!) spectators.

We also remember how Nigel Mansell (who always celebrated his birthday at us and once got a racehorse called Skala as a present) lost a wheel nut and with it the race itself, even though he had started from pole position in 1987.

Damon Hill’s bad luck is also memorable („What happened to Damon Hill?”) when in the final lap, due to a technical problem victory slipped his hands (1997), just as the great battles fought on the asphalt between Alain Prost and Ayrton Senna.

Jenson Button’s rainy victory (his first) is just as much the part of the race track’s history as Michael Schumaher’s four or Lewis Hamilton’s five Hungarian victories respectively – since 2016 the British driver is the only record-holder.

Now it is history but at that time it was a fantastic achievement (and quite unparalleled in the world) that Hungaroring was built within a mere eight months, so that on the 10 August 1986 the First Hungarian Grand Prix could take place.

The race track has been reconstructed twice since then, first in 1989 removing chicane nr.3 from the trackline, than in 2003. This latter brought a more significant change: longer finish straight, modified 1st and 14th corners and a total track length reduced from 4,014 metres to 3,975 for the world’s best pilots to compete on.

The track is dusty, and the race is hot – this is the most often heard remark from those speaking about the Hungarian run. Then immediately added: one of the most challenging races of the season from the pilots’ point of view.

To win on this tricky, tortuous track that hardly offers any straights is an enormous achievement, which took Sebastian Vettel 9 years to conquer, though being one of the most talented drivers of our time.

Among the many modern race tracks built in a uniform style, Hungaroring represents an older tradition, the classical style that has gained extra value for now. It is really popular with the drivers and the teams.

„The valley, the environment is beautiful and the proximity of the capital is a great attraction to everyone. As for the track... In 2016 we put new asphalt on the track as a first step of improvements” , says Zsolt Gyulay, president CEO of Hungaroring who is a two-time Olympic champion and member of the Olympic Committee, still amazed by the professionalism demonstrated by the teams. As he says, the reason why it is excellent to work with the field and staff members of Formula-1 is that they are quick to take up the pace.

„Everybody is highly disciplined here, as basically the whole of motorsport is. Also it demands professionalism to know that we play a part in one of the most, or perhaps the most viewed race series of the world, which means obligations for the pilots and the hosting countries alike” Gyulay adds.

Although the Hungarian run of the world touring car championship (WTCC), the DTM or the ETRC race is almost as big a challenge as F1 (and the WTCC attracts almost as many spectators too), the staff at Hungaroring, preparing for the 33rd Hungarian Grand Prix makes use of their professional experience gained over the years not only within the premises of the race track.

The Great Run, that takes place in the downtown of Budapest brings the Speeding Circus and motorsport close to those too who may not make it to Hungaroring, while organizing Red Bull Air Race also fits perfectly to the profile of the race track – being also a kind of Formula – 1, held in the air.

Back to the Hungarian Grand Prix once more. It must not go unmentioned that our race has never been in danger in the past decades, what is more, once (in 2002) it won the prize of Run of the Year, that was received at the season closing gala of the international association.

An organic part of the race track’s history that on Hungaroring, as the first Hungarian, Csaba Kesjár (who unfortunately later died in a tragic racing accident) drove a Formula-1 car in 1987, testing Zakspeed, and also here was the first run of Formula-1 of Zsolt Baumgartner’s career (2003 – Jordan), who got the great opportunity after the accident and injury of Ralph Firmann, that resulted in his contract for a full season with Minardi in the following year.

At the moment there is no Hungarian driver in the Formula-1 world championship series, yet in the racing calendar the Hungarian Grand Prix with its decades long history still plays a significant role, and will continue to do so based on our contract until 2026...

This year we will hold the usual ”Thursday Public Pit Lane Walk” which has become a tradition in the history of Hungarian Grand Prix.

Visitors may participate in and access the Pit Lane with weekend tickets only. The programme starts at 16:00 on the 26th of July and lasts until 18:00.
Spectators arriving for the Pit Lane Walk may enter the circuit via Gate 8. until 17:30

After 17:30, only people inside the gate will be allowed to participate in the Pit Lane Walk, during which they can take a close look at the teams garages or get an autograph of their favourite drivers.

This activity is always popular with the fans, therefore please allow plenty of time to access the circuit. We ask the supporters to take this into consideration and depart in time.

Information panels will indicate the list of objects which cannot be taken into the track – we have installed free lockers at Gates 7. and 8. for the purpose of safe keeping of such objects.

For those sporty supporters arriving by bicycle, a bicycle parking lot has been put in place at the lower parking lot in front of the main entrance.

How to get there