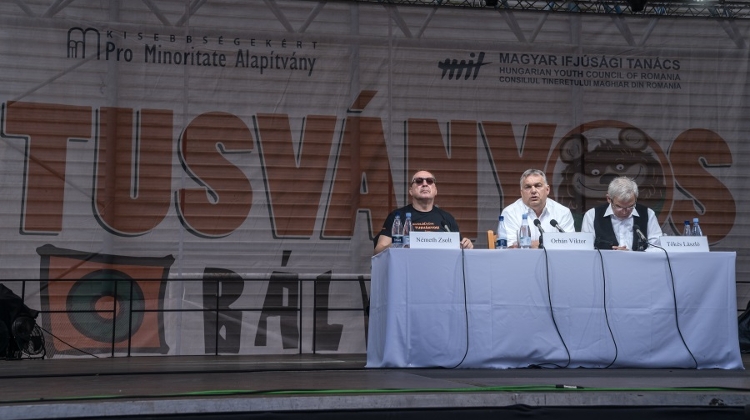 At the 29th Bálványos Summer University, in central Romania, a longstanding cultural event for ethnic Hungarians, the prime minister said that every European country had the right to protect its Christian culture and the traditional family model, as well as the right to reject immigration.

Commenting on the speech, the spokesman of leftist opposition Democratic Coalition (DK) said Orbán’s speech was a “declaration of war on Europe, Hungarians and freedom”. Orbán painted a picture of a Europe torn by a political and cultural conflict between nation states and regions, Sándor Rónai told a press conference on Saturday.

Voters in the European parliamentary elections in 2019 will choose between “a Europe that follows the worldview and nationalism of the 1930s or the united, strong European approach of [German Chancellor Angela] Merkel and [French President Emmanuel] Macron,” he said. “We do not need less Europe, but more of it ... If Hungary wants to live and prosper in peace, Orbán must go.”

Conservative Jobbik’s spokesman told MTI that Orbán’s speech showed that he prioritised his own European political ambitions over Hungary’s fortunes. Orbán “has indicated more than once” that he sees himself as a potential leader of Europe, party spokesman Ádám Mirkóczki said. Orbán, he added, was cynical to declare that western countries are not democratic.

It is Orbán who has dismantled freedom of speech and the press, as well as abolishing public institutions which are the bedrock of democracy, he insisted. Several “allegedly independent institutions” are “stuffed with party soldiers”, he said.

Socialist leader Bertalan Tóth said that the Christian democracy outlined by Orbán in Baile Tusnad was “far removed from Hungarian reality”. In a video uploaded to the party’s Facebook page, he said that tens of thousands of families faced eviction, health care was in a state of “devastation” and the situation of FX loan-holders was still unresolved.

Orbán’s Fidesz party is not independent from the European elite but rather belongs to a party family which provides the majority of officials to the European Commission and the European Parliament, he said.

The Carpathian Basin cannot be rebuilt without the EU, Tóth said. Without the EU, “we cannot speak of central European development, an economic region or the cooperation of free states,” he said. Tóth called for a cooperative, socially engaged Europe that protects its borders and finds common solutions to challenges.

The opposition Párbeszéd party said in a statement that Orbán “only offered” Hungary isolation and division along cultural divisions instead of “openness to explore the world around us”. Richárd Barabás said that Párbeszéd backed Fidesz’s goal to make Hungary prosper but the route the ruling party was taking was a bad one.

László Loránt Keresztes, the coleader of the green LMP party, said in a statement that the European Union’s “severe operational problems” have to be addressed. “What’s really at stake in the coming period” is whether Hungary can make changes that make the bloc more effective, Keresztes said.

The migration crisis is one of the most serious of these problems, he said. But the government should also take steps against a strengthening Russian influence, he said. Orbán “continues to build an alternative reality where propaganda determines everything,” Keresztes said.

Before attempting to rebuild the Carpathian Basin, the government should solve problems such as the emigration of hundreds of thousands of Hungarian youth, he said. “This is the real national tragedy.”