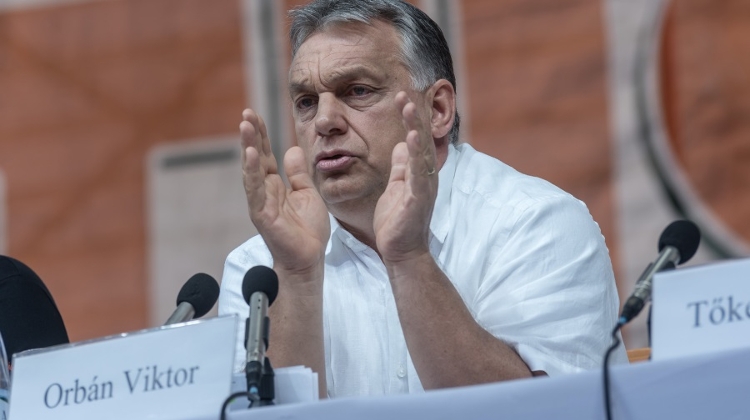 The result of next year’s EP elections would result in bidding farewell to liberal democracy and to “the elite of the 1968”, Prime Minister Viktor Orbán said at the 29th Bálványos Summer University in Baile Tusnad (Tusnádfürdő), in central Romania.

Instead of the 1968 generation, the time has come for the anti-communist, Christian, nationally committed generation of 1990, he insisted.

Meanwhile, Orbán said the EU was currently pursuing a primitive policy towards Russia and “a nuanced policy is needed instead”. The security of Hungary and the whole of the Carpathian Basin, as well as that of Europe, depends on whether Turkey, Israel and Egypt are stable enough to stop the influx of Muslims, he added.

Orbán set out five principles that were necessary for central Europe to occupy a “worthy place” in Europe. Every European country has the right to protect its Christian culture and to reject “the ideology of multiculturalism”.

Also, the traditional family model and the principle that “every child has the right to a mother and a father” must be upheld. Further, central European countries have the right to protect their nationally strategic sectors and markets. Countries also have a fundamental right to defend their borders and to reject immigration, he said.

The principle of “one nation, one vote” on the most important issues should be insisted upon, he said, adding that this principle cannot be bypassed in the EU. “We central Europeans hold that there is life beyond globalisation and that central Europe follows the path of an alliance of free nations,” the prime minister said.

Orbán declared that immigration would be the single serious issue in next year’s European parliamentary elections. He linked the outcome of the EP elections to the fate of its leadership, saying that when European citizens decide on the issue of immigration, they will have also passed judgement on the European elite and whether it has handled immigration properly.

“There is liberalism but there is no democracy,” he said, adding that this assertion was supported by a general tendency in western Europe to curb freedom of expression and introduce censorship.

The prime minister said that after eight successive years of a Fidesz government, in the April general election it received a two-thirds majority and with it “authorisation to build a new era”.

The process of Hungarian unification has now turned into one of nation-building, he added. Hungarians have shown they are able to understand complex situations, he said. “If need be, we have the will to decide on our destiny and move as a nation.”

“From Szeklerland, I can say that Hungarians from beyond the border have stood up for Hungarians of the motherland,” he said, adding that every vote was an undertaking of responsibility for Hungary.

He said Fidesz’s two-thirds majority won in 2010 had entitled the government to build a new system with a Hungarian model for the economy and a new constitutional order based on national and Christian foundations. In 2014, it was similarly endorsed to stabilise this system, he added.

Following the outcome of this year’s election, Orbán said it was time to build a new era and to embed the political system into this new cultural era. “A new intellectual and cultural approach is needed,” he said. Based on this stability, the government has set goals that could only have been dreamed of in the past, Orbán said.

He declared that by 2030 Hungary would be among the top five countries in the EU for quality of life. Further, it will have stopped its declining population, he said. Motorways will have reached all its borders and it will have created energy independence, he continued.

“Thirty years ago, we thought that Europe was our future; we now think we are the future of Europe,” the prime minister said, concluding his speech.