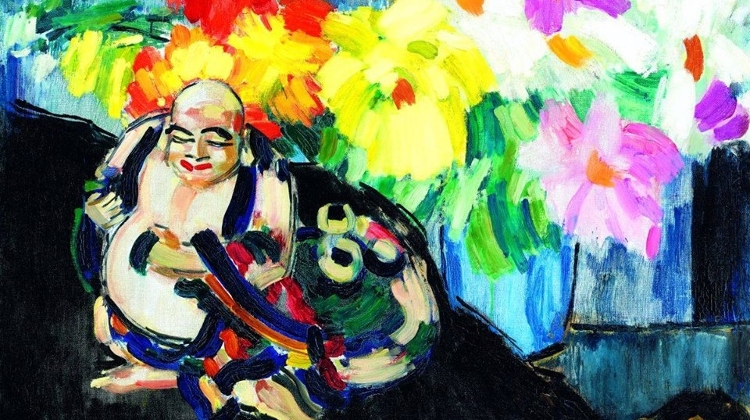 Now on until 20 January 2019. The exhibition presents the life reform movement that emerged in the last third of the 19th century and popular in Central European countries, and its impact on contemporary artists.

“Life reform” is a collective term summing up fin-de-siècle reform efforts of modernisation criticism, whose common feature was the return to nature, self-healing and the search for lost cosmic completeness and spirituality.

The often arguing trends of this multi-coloured movement, which sought to reinterpret the relationship of man with nature, work and God, were linked by joint motto of civilisation criticism: “escape from the city”.

At the turn of the last century, this movement enjoyed a heyday in, among other places, the Austro-Hungarian Monarchy.

Vegetarianism, natural healing and body culture, as well as various occult religious manifestations and society-improving reforms became widespread chiefly among the haut-bourgeoisie and aristocracy, while in the lower-middle and working classes it took the form of teetotalism, gym and sports movements, and naturist and hiking movements.

Many of the young writers, artists, composers, philosophers, natural and social scientists appearing in major cities around the Monarchy, such as Vienna, Prague and Budapest, themselves followed and even propagated these fashionable self-reform efforts and the associated esoteric, gnostic ideas of redemption and social-reform Utopias.

Taking these as a starting point, the exhibition is not only aimed at presenting the trends of the movement in this region.

As the title Hidden stories suggests, it also explores the yet unrevealed, hidden link between the artists of the age and the life reform movements. It reviews the role of artists responding to the spirit of the modernist criticism in the intellectual, religious, spiritual, social and artistic reform experiments, and, in turn, their impact on their works, lifestyles and attitudes.

The “hidden story” is revealed to the viewers by means of little-known photographs, objects, documents and the works of eminent artists  – including Tivadar Csontváry Kosztka, János Vaszary, István Csók, Mariska Undi, Sándor Bortnyik and Álmos Jaschik– and the buildings of István Medgyaszay, who melded Oriental influences with traditional Hungarian ornaments, period book illustrations and photographs of iconic performance of fin-de-siècle dance performances.

Some of the artists joined the life reform movement, others explored individual ways in keeping with the Zeitgeist, often turning to avant-garde art.

The ideas of the early-20th-century movements reappeared in the form of “surviving Utopias” in the movements of 1968, as well as in the New Age religious, political, economic, lifestyle reform ideas and in the contemporary arts.

They influenced the rise of leisure clothing and sports fashion, the fitness movement, vegetarianism, organic farming and reform cooking, the ecological movements and the ideas of natural remedies.

Also, they affected many aspects of everyday life management practices, such as the spread of various eastern religions and martial arts, the emergence of anthroposophy and various esoteric trends, the development of suburban and near-nature living environments, the rise of equality-based relationship and the modern ways of child-centred education.

The exhibition reveals the way in which the ideals of the movement radiated in many directions, inspiring even contemporary art.