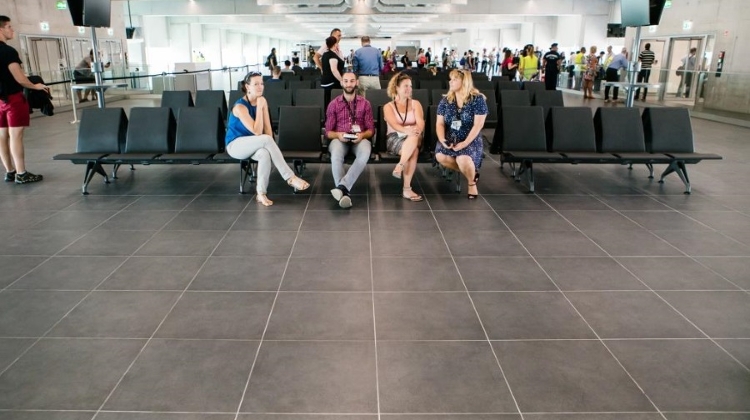 The new pier adjoining Terminal 2B at Budapest Ferenc Liszt International Airport is ready to handle flights as of today. The new passenger traffic facility of more than 10 000 square meters will be installed into operation gradually, thus expanding the capacity of the airport.

A glass of cool champagne, soft drinks and pogácsa (savory scones) – these were the treats offered by Budapest Airport employees to the 156 passengers of the Wizz Air flight to Astana, which departed from the new pier B today.

Travelers on board the Airbus A 320 heading to the Kazakh capital were the first to enter and use the first boarding gate in the new, more than 10 000 square meter traffic facility. The pier will facilitate rapid and convenient departure and arrival, and will be able to meet the diverse needs of different airlines.

The first airliner was able to depart from pier B two months ahead of schedule, thanks to a large extent to the diligent work of the contractor, KÉSZ Építő Zrt. and also the hard work of airport and IT-experts who helped to install systems in time before the opening.

Due to the dynamic increase in passenger traffic over the past three and a half years, the management of Budapest Airport decided to use the first boarding gate as soon as it was ready and able to accommodate passengers; naturally, only once the necessary trial operations and security checks have been completed.

Thus, the Wizz Air flight to Astana, piloted by captain Hajnalka Magyar and her crew, departed from gate C 12 today.

The construction of pier B began one and a half years ago, on 1 March 2017, with the demolition of the concrete apron in the area, as part of the first phase. Roof-topping on the reinforced concrete and steel structured building occurred on 14 November 2017, and, due to the relatively mild winter, internal construction and fitting works proceeded practically without interruption.

Following full completion, pier B will be able to accommodate three wide body (intercontinental) and four narrow body aircraft at the same time, or, alternatively, ten narrow body aircraft. It will also be equipped with bus gates, whereby it will offer a total of twenty-seven different options for passenger handling.

“It was very important for Budapest Airport and its passengers to commission the new facility as soon as possible, since traffic has been growing rapidly for years, and we needed additional capacities to provide convenient service for our passengers.

Upgrading and expanding our airport infrastructure is one or our key targets.” said Péter Huszka, the chief operating officer of Budapest Airport.

“With gradual installation into operation, we are able to utilize the opportunities provided by modern technology, and, together with our airport service partners and the authorities, we can gain valuable experience in the operation of the pier,” he added.

As part of the scheme, Budapest Airport already renovated a 2.3 kilometer section of the concrete surface on runway I, constructed a new logistics base near Terminal 1 (for DHL and TNT Express), handed over a thousand new parking spaces and the new airport hotel.

The construction of a new cargo base, the Cargo City, will begin near Terminal 2 in the fall, and work on a multistory car park with six levels in front of Terminal 2 will commence in December.

“The construction of pier B was an especially tricky task, since works had to be organized so as not to disturb the pulsating life of the airport.

Thankfully, we and the experts of KÉSZ Építő Zrt. already amassed a lot of experience in this respect during the construction of the SkyCourt, the central passenger traffic facility between Terminals 2A and 2B,” commented Stephan Schattney, the chief technical officer of Budapest Airport.

He also noted that, thanks to the modern construction technology employed, the airport operator has put in place a highly flexible building able to meet the diverse needs of the various airlines, which should be popular with passengers due to its functionality and unpretentious solutions.