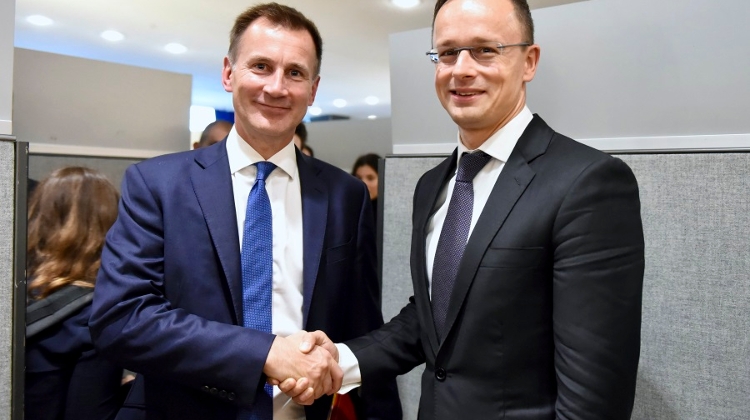 Hungary is interested in seeing the “deepest and most comprehensive possible” free trade agreement between the European Union and the United Kingdom after the latter country leaves the bloc, Hungarian Foreign Minister Péter Szijjártó said at a meeting with his British counterpart in New York.

At the meeting held on the sidelines of the United Nations’ General Assembly, Szijjártó told Jeremy Hunt that an agreement should be sought to minimise the economic damage caused by Brexit.

Szijjártó noted Hungary’s open economy, adding that free trade with its top partners was crucial. He gave warning that a lack of agreement in the Brexit talks could make investment and trade cooperation between EU member states and Britain “extremely cumbersome” and these could be reduced to a fragment. WTO rules would govern ties, burdened with tariffs and “other hindrances”, he said.

The minister also said that “Europe has never before faced such a serious threat of terrorism”, adding that the UK’s contribution to ensuring security was crucial, especially in terms of Britain’s intelligence and defence systems.

He said the UK should continue participating in European missions, “otherwise a large part of those missions will be shut down”.

He said that “the childish attitude of taking revenge on Britons to show them what a bad decision they have taken with Brexit” should be dropped, and the EU and the UK should “set up the closest possible security cooperation”. Szijjártó is scheduled to address the UN General Assembly on Friday.