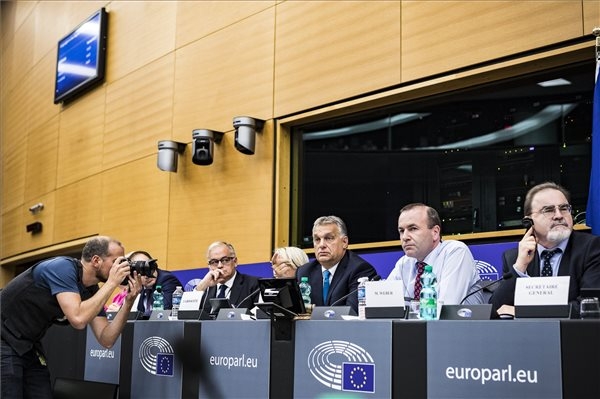 Prime Minister Viktor Orbán, in a European parliamentary debate in Strasbourg on Tuesday, said: “The problem with Hungarians who vote against their own country is that they hate me more than they love their country.”

Reacting to liberal EP group leader Guy Verhofstadt’s address in a debate on a report criticising the state of the rule of law in Hungary and calling for the launch of the Article 7 procedure which suspends a member state’s rights, Orbán said the MEP “hates conservative Christians more than he loves Europe”.

Verhofstadt had said that Hungary would not be accepted into the European Union today and that the criticisms laid out in the report prepared by the EP’s civil liberties committee were directed exclusively at Hungary’s government.

“Anyone who says that the report doesn’t condemn Hungary should read its title,” Orbán said. “It’s not about condemning the Hungarian government but Hungary”.

Orbán also issued a rebuttal to Manfred Weber, group leader of the European People’s Party, who had said launching the Article 7 procedure could be warranted if Hungary refuses to address the EU’s concerns in ongoing disputes. Weber brought up the issue of Budapest’s Central European University (CEU) and Hungary’s amended higher education law, underlining the importance of academic freedom.

The prime minister encouraged MEPs to check the CEU’s website, which he said declares that the university’s future was secure and that all students enrolled there will be able to complete their studies in Budapest.

Orbán also said that the issue of migration was not a partisan  one, adding that he was ready to cooperate with all governments that are committed to protecting the EU’s borders.

As regards the issue of anti-Semitism, Orbán said it was on the decline in central Europe but rising in western Europe. “In fact, the centre of modern anti-Semitism is in Brussels, because that’s where they’re supporting anti- Israel organisations from,” the prime minister argued. “It wasn’t us, but you who laid a wreath at the statue of [Karl] Marx, the father of modern anti-market anti-Semitism,” he told MEPs.

Addressing allegations of corruption, Orbán said all tenders in Hungary were public and any European company was free to bid for them.

PM Orbán: Hungary Won’t Give In To Blackmail