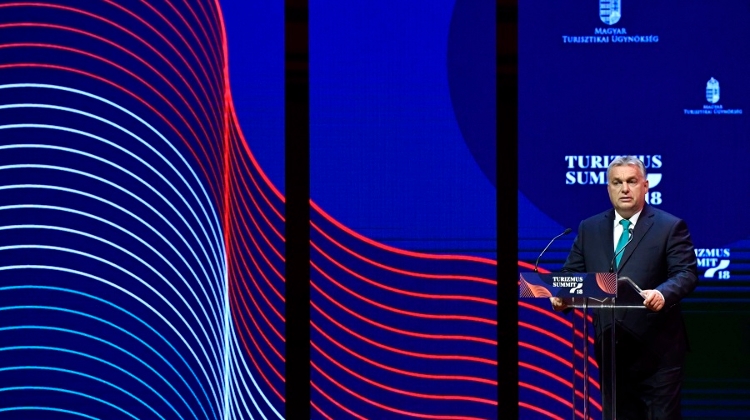 Increasing the contribution of tourism to 16% of Hungaryʼs GDP by 2030, developing tourism in the countryside, a speech by Prime Minister Viktor Orbán, and the unveiling of a new national brand "WOW Hungary" were all on the agenda at the Tourism Summit 2018.

At the beginning of the event, a "making of" style video of the recent "Spice of Europe" campaign of the Hungarian Tourism Agency (MTÜ) explained how the Budapest-centric ads emphasized the creativity of Hungarians, and how Hungarians think differently.

MTÜ CEO Zoltán Guller then took to the stage, describing Hungaryʼs National Tourism Development Strategy 2030, announced last year, as a strategy developed with "Swiss accuracy" and "Hungarian bravado." According to the strategy, by 2030, the contribution of the tourism industry to GDP should increase to 16%.

Guller set the aim of achieving a 50-50 ratio of domestic and international tourists. He also emphasized the importance of countryside development projects, while noting that currently "66% of international arrivals come to Budapest."

Prime Minister Viktor Orbán also stressed the importance of tourism to the nation, terming it "one of the greatest contributors to the national economy," and noting that the industry provides livelihoods to 400,000 Hungarians. While noting that Budapest is tourismʼs "flagship," he also stressed that it is his "personal ambition" to make as many people interested in the countryside as in the capital.

Dávid Farkas, deputy CEO for tourism strategy, noted that 60% of tourism campaignsʼ presence occurs online. He added that the MTÜ involves a number of partners such as National Geographic and CNN.

A new national brand, "WOW Hungary," focusing on destinations outside Budapest, was announced in a video which explained that "WOW" is short for "Wellspring of Wonders," with its logo based on an ancient Hungarian motif. The winning tender for the project was submitted by Graphasel Design Studio.

The image film for the campaign was made after its makers had traveled 6,420 kilometers following 35 days of preparation, with the film crew visiting 90 towns in 22 days.