Local Opinion: CEU Moves 4 Courses Out Of 5 From Budapest To Vienna 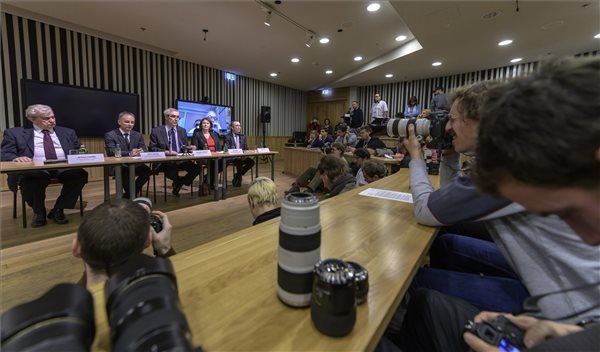 After the President of the Central European University announced that 49 of the CEU’s 59 courses will be transferred to Vienna, the debate continues in the press on whether the government’s refusal to let them stay serves or harms Hungary’s interests.

Michael Ignatieff, the President and Rector of the Central European University told the press on Monday that since no more students are allowed to be recruited to its US accredited courses in Budapest from January 1, those programmes will be transferred to Vienna from September next year.

The US State Department expressed its disappointment. The US Ambassador to Budapest told RTL TV that his sustained efforts to keep the US degree courses in Hungary failed because of an irreconcilable conflict between PM Viktor Orbán and the CEU’s founder, American-Hungarian financier George Soros.

David Cornstein added that the CEU could have been more willing to find a more suitable solution. István Hollik, the newly appointed government spokesman called the departure of the CEU a ‘bluff’, since it will continue to offer courses in Budapest.

In Magyar Hírlap, Csilla Korompay quotes a Washington Post report about a meeting at the American Embassy where the Ambassador said that given its small size, the CEU could not be compared to the big American universities and therefore found it strange that its fate had become ‘such a big issue’. Her answer is that what makes the CEU so important for so many influential people is its networking.

In other words, she writes, the CEU is world class ‘in matters of bluff’. That is why its alumni find it easy to find jobs and this is why the media ‘trumpets’ how happy Vienna is to host the CEU. Viennese people are in reality no happier than the people of Budapest are unhappy about the CEU transferring courses to the Austrian capital, Korompay concludes.

In a harshly worded reaction, 888’s Gellért Oláh describes the CEU as ‘an illegally operating liberal degree factory’. Its US campus which was supposed to legalise it, he continues, is one small pavilion and its compliance with the new legal regulations is therefore fully fictitious. In the headline to Oláh’s commentary, 888 defines the CEU’s departure as ‘the best news of the week’.

In a bitter column on 444, Gergő Plankó finds the indifference surrounding the matter devastating. On Monday afternoon, a mere 40 people gathered in show of solidarity in front of the CEU building in Budapest and at least ten of these were news reporters.

He sharply criticises the US Ambassador, accusing him of minimising what has happened by framing it as the expression of a personal feud between Mr Orbán and Mr Soros.

In a rare political editorial, Blikk deplores the departure of most CEU courses from Budapest as a textbook case of why education should not become the stake of political games.

That ‘prestige clash’, the editors of the tabloid write, could have been fought on so many other battlefields. That was not the case, and thus there are only losers all round. Hungary is losing professors and students ‘and we are not well enough off to afford that’.