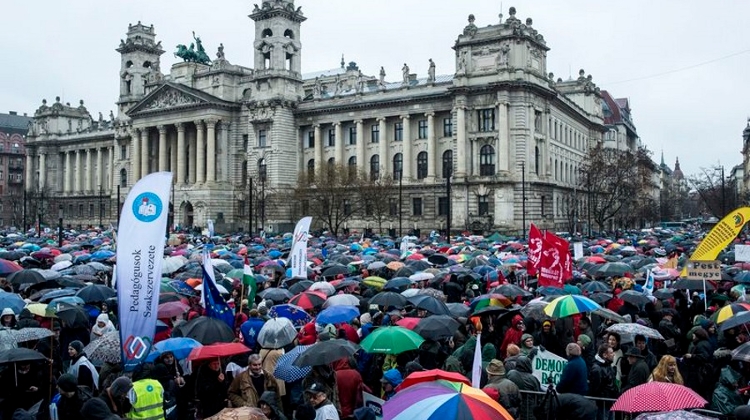 The Hungarian government recently submitted a bill that would ban demonstrations at many important, symbolic locations in Budapest and would only permit events organized by the government. For years, the most important protests have been held at these symbolic locations and at public holidays.

The downtown area is the most relevant for protests, as the majority of them take place at these venues.

This is the main point of the amendment: Kossuth Square, the central location for political protests, and its surrounding area would be denied to protesters on every single public holiday.

Besides that there will be other important locations affected: no protests can take place at the bank of the Danube on August 20.

The National Museum and its surrounding streets will be off limits on March 15; and on October 23, the Műegyetem Quay, where the Hungarian Revolution of 1956 started, will also be closed for protesters.

June 16 is a remembrance day of the anniversary of the reburial of Imre Nagy who was a leader of the revolution of 1956. On this day only government-organized events will be allowed on Heroe’s Square, where the re-burial took place in 1989.

It is important to note that, according to the amendment, protests would not only be banned at these locations when the state is organizing an event at the particular location. Even if there is no government event planned and the entire area is empty, demonstrations independent of the government will be still prohibited.

There are 23 public holidays and remembrance days in Hungary, and the amendment intends to ban protests on all these days on Kossuth Square, that is, in front of the Parliament.

In addition, from the first Sunday of Advent until January 6 the government organizes a series of events called “Christmas of Hungary” on Kossuth Square, thus these days would be also banned for anyone else who wants to organize a protest there.

This means that the most important square for political protests is off limits for demonstrators for 50 days every year - that is, one-sixth of a year.

Moreover, the streets surrounding Kossuth Square could not be used for protests on the most important Hungarian holidays: March 15, June 4, August 20, October 6 and October 22-23.

These bans would have a very strong effect on the possibility to protest in the entire country, as Kossuth Square is the most important a popular place for demonstrators to express their displeasure with government policies.

A recent analysis showed that 3237 requests for protest permits were submitted to the police in the past 2.5 years (between November 2015 and July 2018), and approximately two-thirds of these were organized in Budapest (1937 protest). Kossuth Square was the location for 164 protests in this period. In other words: there was a protest in front of Parliament every week.

42 out of the 164  protests in Kossuth Square were organized on public holidays or remembrance days, therefore, had the current amendment been in effect, one-fourth of all protests could not have been held.

If we look at all the protests in Budapest in the given period, we see that out of the 1937 demonstrations in the past 2.5 years, 77 could not have taken place under the new rules.

This seems to be a small number, but the organizers of these 77 gatherings expected 98,000 people to participate. Prohibiting this amount of people to remember a historical event or to express their opinion regarding current issues is extremely consequential.

The amendment authorizes all local governments to create more, locally effective bans. Regarding Budapest, it means that the city municipality and all Budapest district municipalities will have the right – and incentives – to create more protest bans for even more locations and more days.

Regarding the towns and villages, this authorization can be detrimental beyond expectations, as by prohibiting demonstrations on just one or two important streets, freedom of assembly can be practically eliminated.

Local governments will have the right to permit only the events that are favorable to them, and they can ban all other events.

Legal Problems with the Amendment

There are several legal problems with the proposed amendment. First of all, it undermines freedom of assembly. The European Convention of Human Rights states that “No restrictions shall be placed on the exercise of these rights (i.e. Freedom of assembly and association) other than such as are prescribed by law and are necessary in a democratic society in the interests of national security or public safety” (Section 1, Article 11). The amendment would ban protests without reasons and discretion which is against the Convention.

Another legal problem with the amendment is that it would place a specific group of people – the political opposition, non-governmental organizations and ordinary citizens – into a very disadvantaged position.

If it comes into force, opposition parties or civil organizations will not have the opportunity to gather at the most significant locations for commemorating national events.

There are numerous technical problems with the proposed amendment as well. Street names are misspelled or unofficial versions are used in the text – these can be considered spelling mistakes. The amendment would prohibit gatherings in some streets and areas for all 24 hours of specific days, then later in the text, it would ban gathering for the same streets for the morning hours only – these are logical mistakes.

Both types of mistake show that the amendment was created too quickly and without much consideration. In its current state, it cannot be interpreted unambiguously, which seriously harms legal certainty.

Another relevant legal problem is the issue of remembrance days, as they are established by parliamentary or governmental decrees, not by law. Such decrees can be declared after a short and simple process, they have a lot fewer guarantees than a law, and they are usually uninteresting for the public opinion.

In practice, this means that the government could declare a new remembrance day any time, e.g. a week before a planned major protest at a symbolic location. The new remembrance day would not be necessarily noticed by the public, but it would effectively prohibit the protest.

The right to assemble is a basic human right that can only be limited by law, not by government decrees. Thus, the proposed amendment contradicts this, and the Fundamental Law of Hungary (Article VIII (1): “Everyone shall have the right to peaceful assembly.”).

What Can Be Expected in the Near Future?

The proposed amendment was debated in the Parliament on November 21, and it can be voted upon on December 10-11 to be a law. The rules will be effective starting May 1, 2019.

The legality of the amendment will surely be challenged before the Constitutional Court of Hungary and the European Court of Human Rights. These bodies may override the restrictive provisions of the law.