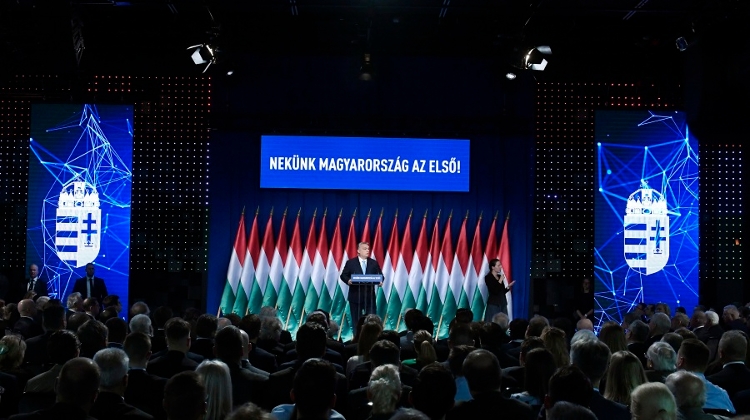 Viktor Orbán, Hungary’s prime minister, announced a seven-point family protection action plan in his state-of-the-nation address, saying this is “Hungary’s answer [to challenges], rather than immigration”.

Orbán said every woman under 40 years of age will be eligible to a preferential loan when they first get married. The preferential loan of the family home purchase scheme (csok) will be extended; families raising two or more children will now also be able to use it for purchasing resale homes.

The government will create 21,000 crèche places over three years. Grandparents will also be eligible to a child-care fee and look after young children instead of the parents, he said.

'Hungarians Have Faith In Their Future Again'

“Hungarians have faith in their future again, we have created a national consensus on the issue of family. Neither the third two-thirds majority, nor the outstanding economic growth were given to us as a present, Hungarians have worked hard for both,” Orbán said. Politics and the economy are deeply related and the achievements “can never be attributed to blind luck alone”, he added.

Orbán noted that in 2009, towards the end of left-wing rule, “our shared assets, reserves and future possibilities had all been used up”. Hungary needed more than just crisis management, it needed a complete renewal, a new direction, he said.

Today, the number of marriages is increasing, infant mortality has been reduced, employment has grown from 55% to 70%, unemployment has been reduced to one-third of its earlier level, incomes are growing, and the minimum wage has more than doubled. “Thanks to the joint efforts of the past ten years, Hungarians have faith in their future again”, Orbán said.

Addressing successful entrepreneurs, Orbán asked them to make investments abroad and repatriate the profits, which could offset the amount of the profit taken out of Hungary. He said this could take at least ten years.

As regards the “trunk” of the country, who are neither poor, nor well-to-do, Orbán said these people expect to have work, security and a home.

He listed the 800,000 jobs created, the doubling of the minimum wage, the family tax benefit, free school dinners and textbooks, the child-care fee available to working mothers, the centrally mandated utility price cuts, stable pensions, all the things benefiting these social groups that his government has introduced.

“However, the toughest nut to crack will be to help lift the hundreds of thousands struggling with poverty,” he said. Orbán said his government has undertaken to fight poverty, and Hungary is a place where everyone will benefit from being Hungarian, and step by step, with persistent hard work, “we will eliminate poverty”.

He said everyone will have work and a home, every child will have access to crèche, kindergarten, school, school dinners and textbooks, there will be support for young people, and a respectable old age for seniors.

Orbán said “our national pride has its economic foundations”. “By its population, Hungary takes 88th place among the world’s nations, but it is 34th in terms of its export volume.

This is thanks to the performance of Hungarian engineers and workers”, he said. “We have answers to the challenge of the global economic slowdown and will not give up our plan that Hungary’s economic growth should exceed the EU average by at least 2 percentage points every year. Our greatest achievements are yet to come, we have just got into the swing of it,” he said.

Orbán called the Hungarian opposition “a bunch of pro-immigration politicians who are kept on a respirator by [US billionaire] George Soros and the EU bureaucrats”.

He said “it is a kind of political pornography” that the Socialists and the extreme right have formed a coalition. “We have to hear that listing MPs of Jewish origin is not anti-Semitism and he who says this wants to become mayor of Budapest instead of sneaking away. We can only say that this is a shame,” Orbán said.

The prime minister said it is a shame on the whole of Europe that the international left wing supports this and sends its leader here to give his blessing for this political aberration. Resorting to physical violence and running riot in parliament, the politicians of the opposition coalition seem like comedians rather than political leaders, he said.

The prime minister said that thirty years after the change of regime, we have to again “stand by our nationhood, our Christianity, we have to protect our families, our communities and our freedom as well”.

He said “there are once again forces advocating open societies and a world without nations, “fabricating” a supranational global government, and these are still controlled from abroad. He called Brussels “the citadel of new internationalism” and immigration “the instrument of this internationalism”.

He said Brussels has worked out a seven-point plan of action for turning Europe into a continent of immigrants after the EP elections. Orbán said Brussels wants to introduce mandatory migrant quotas and curb the member states’ rights to defend their border. Soros made no secret of his plan to defend migrants, an effort hindered by national boundaries, he said.

The European Parliament has voted for introducing migrant visas and increasing support for pro-immigration organisations. Further, plans are afoot to fine member states that do not obey, Orbán said.

“The target countries for migrants are witnessing the emergence of a Christian-Muslim world with a shrinking rate of Christians. But we, central Europeans, still have a future of our own,” he said, adding that the government’s immigration policy will remain stable.

The prime minister called the European left wing “a vanguard of speculators, an advocate of cosmopolitanism, global government and worldwide migration, and a gravedigger of nations, families and the Christian way of life.”

“We wish to see Europe respect the nations’ decisions on their future and accept that we, central Europeans, wish to advance on the road we have chosen,” he said.

Orbán noted that the birth rate keeps declining all over Europe and that the western countries have reacted to the challenge with immigration. “Immigration, however, would mean that we have laid down our arms.”