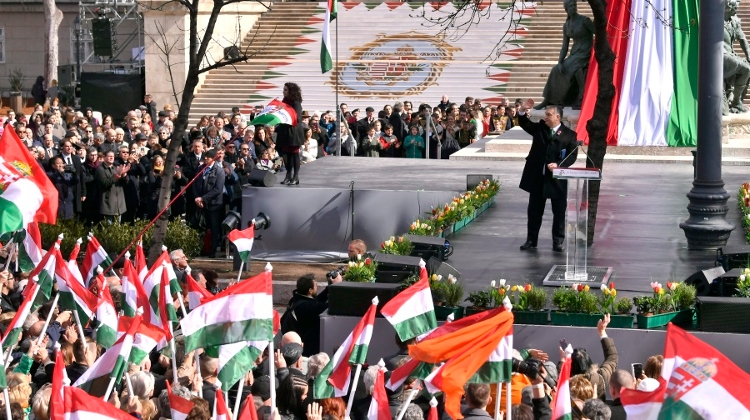 Europe’s peoples should “see and understand that Europe will have no free life without its Christian culture”, the prime minister said at a state celebration on the anniversary of Hungary’s 1848 revolution in front of Budapest’s National Museum on Friday.

“Unless we protect our Christian culture we will lose Europe and Europe will no longer belong to Europeans,” Viktor Orbán said, adding that “all of us would lose our freedom in a liberal empire”.

“Nobody can be free if they are subjects of an empire rather than children of a free nation. Europeans can only be happy if they can decide on their own fate and on the future of their nation.”

Orbán welcomed Polish participants in the celebrations, saying that “without Poland Hungary would not be free and Europe could not have been re-united”. “When they attack Poland from Brussels, they attack the whole of central Europe, including us, Hungarians.

Our message to the empire-builders seeking to extend their shadow over central Europe is that they will always need to consider Hungarian-Polish ties,” he said.
Concerning Europe, the prime minister called for “strong nation states and new, strong leaders” who will “take aid over there rather than bring problems over here”.

We want a new beginning to stop Europe’s decline and put an end to the nightmare of a united states of Europe,” he said.