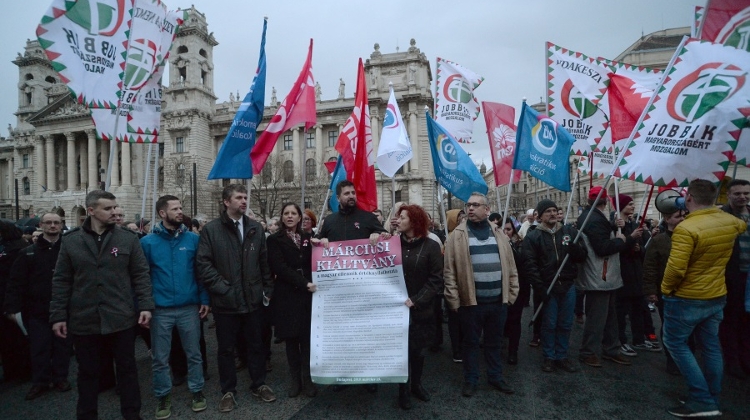 Hungary’s parliamentary opposition parties emphasised the importance of cooperation at a joint demonstration held on the occasion of the March 15 national holiday on Budapest’s Szabadsajtó (Freedom of the Press) Road.

Klára Dobrev, who heads the European parliamentary election list of the leftist opposition Democratic Coalition (DK), called for establishing a “normal, livable” Hungary, which she said required “clearing out the Orbán regime”.

She said everyone who is a patriot today must revolt against the Fidesz government. Those who still strike a deal with Orbán’s regime for the sake of their livelihood “destroy their own future”, she added.

Independent MP Ákos Hadházy said that instead of talking too much and plotting against each other, the opposition parties needed to work and organise themselves, and instead of resignation they needed resolve and determination.

Péter Márki-Zay, mayor of Hódmezővásárhely and head of the Everyone’s Hungary Movement, said the governing politicians had “good reason” to be scared because something had changed.

He called on the parties to support the most suitable, preferably independent candidates, who can also attract votes from Fidesz voters in the autumn municipal election, instead of “party soldiers”.

Jobbik spokesman Péter Jakab said Orbán did not understand the message of March 15, saying that it was “not the holiday of the tyrant but of the people”. He said Orbán was only out to eliminate Brussels, while “he has replaced freedom with servility, equality with inequality and fraternity with hate”.

LMP board member Szabolcs Turcsán said the opposition must turn its diversity into an advantage, because it can only succeed if it learns to engage in politics in a way that helps everyone.

Anett Bősz of the Liberal Party said today’s protestors had the same goals that 19th-century poet Sándor Petőfi had stood up for in 1848: press freedom, equality in front of the law and a responsible government.

Independent Student Parliament representative Dániel Kálló, who is fifth on the Socialist Party’s EP election list, said that as long as young people were not free to decide on their own futures, it would be stolen from them.

Anna Donáth, deputy leader of the opposition Momentum Movement, said that in order for a united opposition to be successful, the various parties had to identify values that could convince everyone that the parties want a better and fairer country.

Párbeszéd MEP Benedek Jávor said that in May’s EP elections, every voter would get the chance to send a message to the government that they favour Europe over “Eastern oppression” and freedom over tyranny.