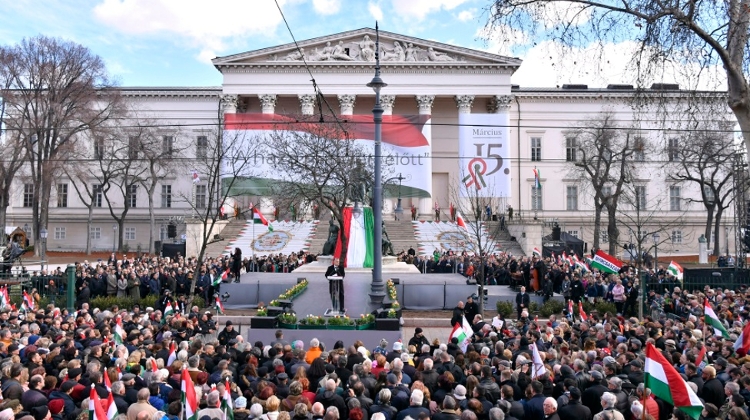 The nationwide weeklies were on the stands well before the Prime Ministers of Poland and Hungary addressed a crowd in Budapest on the anniversary of the 1848 Hungarian revolution, but they analysed the importance of the event beforehand and also dwelled on its international implications.

In Figyelő, Zoltán Kiszelly sees the presence of the Polish Prime Minister in Budapest as an expression of the two governments’ joint resistance to what he calls ‘sneaking federalism’.

The pro-government analyst sees Poland and Hungary at the crossroads between expanding empires. Brussels aims at creating a technocratic super-state, he suggests, while Russia and the USA are actively expanding their economic and political influence in the region.

Under such conditions, he explains, both countries need allies. And as the Budapest – Vienna – Munich axis seems to be wearing out, the Budapest – Warsaw axis may fill the gap and be seen as an interesting partner elsewhere – for instance in Rome, Kiszelly writes.

In his Demokrata editorial, András Bencsik contrasts the presence of Poland’s prime minister with the visit paid by EPP top candidate Manfred Weber to Budapest.

He reads the latter as signalling that the threat to expel Fidesz from the European People’s Party has been dampened.

He doesn’t exclude the possibility that Fidesz will eventually be expelled, however, ‘if the EPP is hopelessly rattled by pro-migration forces’. The message of 15 March 171 years ago was that national sovereignty must be defended and all costs, Bencsik continues, and welcomes Poland’s stance on Hungary’s side ‘as so many times in history’.

In Hetek, Máté Kulifai describes Mr. Weber as a weak leader who first threatened Fidesz with expulsion, then when the Hungarian side showed no intention of heeding his demands, People’s Party leaders ‘stepped on the brake’ in an attempt to keep FIDESZ within the EPP until the elections in May.

Whether or not FIDESZ stays in the EPP, he concludes, ‘Manfred Weber and the European People’s Party itself are unfit to lead Europe’.

in Magyar Narancs, political scientist Gábor Török interprets recent articles by pro-government columnists as indicating that the real allies of Fidesz are outside the People’s Party.

Although the Hungarian Prime Minister’s anti-immigration line has many new supporters among leading European politicians, he himself has not become any stronger, Török believes.

Although the traditional party structures are in crisis, he argues, they are not crumbling and thus there is no powerful rival camp Mr. Orbán could join if has to leave the People’s Party.