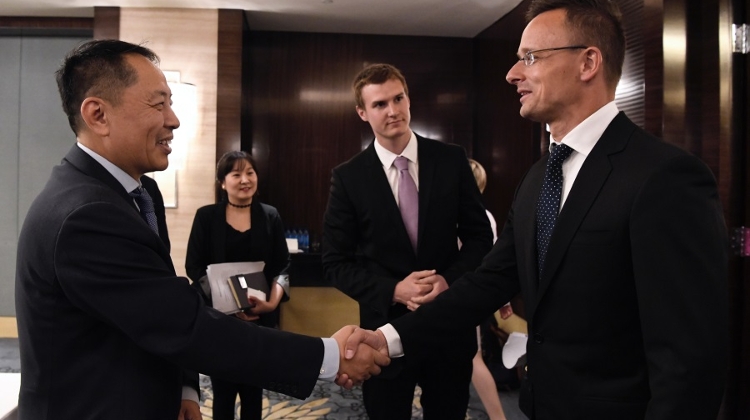 Szijjártó told MTI that they had agreed to set up a Hungarian-Chinese university based on the Chinese Academy of Social Sciences and Hungary’s National University of Public Service. The related agreement will be signed during the Chinese House speaker’s visit to Hungary scheduled for late May.

The two ministers agreed to start preparations for the construction of a Budapest-Bucharest rapid railway via Cluj-Napoca (Kolozsvár). The project will be based on cooperation between the Hungarian and Romanian governments and carried out with Chinese financial and technical help.

The third point of the plan concerns cooperation in architecture so that Hungarian construction firms and engineers should get a chance to participate in implementing China’s national urbanisation scheme, Szijjártó said.

The two ministers also agreed that Hungarian and Chinese companies would seek to jointly carry out water management projects in Asia and Africa.

The fifth point involves boosting tourism by launching new direct flights between the two countries, the minister said. Szijjártó announced that the Chinese foreign minister would pay an official visit to Budapest in the second half of this year to mark the 70th anniversary of Hungarian-Chinese diplomatic relations.

After talks with Chinese company leaders, Szijjártó called it important for Hungary that China’s Belt and Road Initiative should extend to air transport, too. Budapest and Beijing are already connected by direct flights.

From June 7 on, a three-times weekly direct Shanghai-Budapest service will be launched and talks are under way about linking further cities, he added.

Szijjártó, who held talks with senior executives of ZTE and Henan Civil Aviation Development and Investment Co. Ltd., called it vital for the development of Hungarian-Chinese trade relations that air freight transport capacities should be made available.

A regular cargo flight launched between Budapest and Zhengzhou weeks ago was an important step in this direction, he said.

Due to the upcoming construction of a Budapest-Belgrade railway link and the air freight transport capacity recently launched, Chinese logistics firms are now planning to set up a logistics and warehouse hub near the airport in Budapest, Szijjártó said.

All Conditions In Place For Boosting Hungary-China Econ Ties