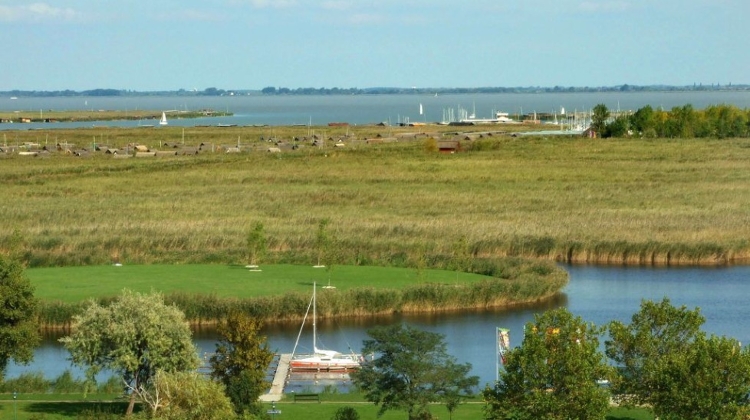 Hungary is going to spend HUF 23 billion (70.7 million EUR) on the construction of a new visitor center on the Hungarian shore of Lake Fertő (Neusiedlersee) on the Austrian-Hungarian border.

The beach is already closed at Fertőrákos, restaurants and boat companies have been kicked out. Local citizens worry about the scale and impact of the development, and suspect Ráhel Orbán, daughter of the Hungarian PM being the mastermind behind it.

The lake itself is a world heritage area managed by Hungary and Austria together, but the Hungarian government did not inform neither the neighbouring country, nor UNESCO about what is coming.

Lake Fertő, or Neusiedlersee is situated on the Austrian-Hungarian border, most of the shores belonging to Austria: Hungary has one beach and port opening to the spectacular lake at the village of Fertőrákos, 10 kilometres from the city of Sopron.

The whole area and the surrounding settlements are part of the world heritage since 2001. The lake is also a nature reserve in both countries, rich in protected flora and fauna.

The plans include a four star hotel with hundred beds, additional guesthouses, a sports center, a nature museum, a new port for sailing boats, and a new parking lot for 880 cars and buses.

At the beginning of this year the development started with closing the beach with a wire fence, and cutting some trees. The SFTFN terminated the contracts of the fast food restaurants and tourist boat companies on site. The latter can stay until the end of August, but then they also will have to go without compensation. In this summer season they already lost 75 percent of their guests because of the closed beach.

Right now the whole spectacular area is sealed off, and visitors are not really welcomed. There is a barrier at the entrance of the parking lot, and two security guards ask the visitors what do they want to do here.

Fertőrákos is also famous for the pile houses made of wood with thatched roof, standing on piles above the lake. These have been built since 1966, and functioned as guesthouses of state owned companies for decades.

Nowadays many of them are private properties of Hungarian and Austrian citizens: the owners feel that soon they also have to go due to the state construction project. 10 out of the 21 pile houses on the lake already burned down in 2017, and the owners were not granted a permission to rebuild them since.

Local property owners complained to Atlatszo reporters that the SFTFN or CEO Béla Kárpáti does not answer their questions about the future of the area.

They say that the megaproject was probably masterminded by prime minister Viktor Orbán’s daughter, Ráhel (30 years old), who is specialized in tourism, and is married to controversial businessman István Tiborcz, who will presumably profit on the touristic megaproject financed by public funds.

Local environmentalists are also worried about the impact on nature, because the planned development contains a lot of concrete, and paving of the lake shore. A local patriot organization called ‘Friends of Lake Fertő’ says that the planned huge buildings don’t fit the view in Fertőrákos, which is known for it’s small wooden houses. ‘We don’t need concrete on Fertő’ – Gyula Major, a member of the organization told Atlatszo reporters.

Zoltán Kun, member of WCPA (World Commission on Protected Areas) said that despite visitors and their boats will not stop at the state border, and the growing number of tourists will impact not only Hungary but Austria as well, the Hungarian government did not inform nor the neighbouring state, neither the international organization about the project.

The impact study mentions Austria only once: “No transboundary effects are likely to occur with the investment.”

Atlatszo sent multiple questions about the concerns regarding the touristic megaproject to SFTFN and the mayor of Fertőrákos, but no one answered us a single word – this is an attitude locals are already familiar with.