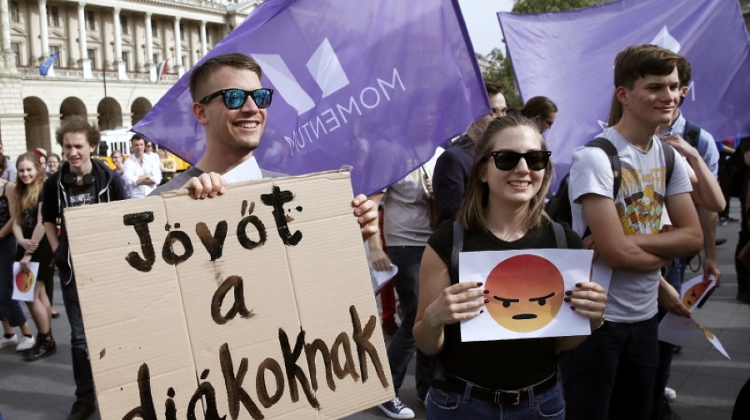 A demonstration organised by secondary school students took place in Budapest in front of Parliament on Saturday to protest against an amendment to the law on public education, with a national student strike announced for Sept. 13.

All students have been asked to stay home as an expression of their protest against the changes to the law.

Tamás Szűcs, head of the Democratic Trade Union of Teachers (PDSZ), said the government was intent on telling people what to do in every sphere and on holding back those who want to innovate in schools. He said all legal means must be used to protest against the government. He also called for teachers to be paid for overtime.

Meanwhile, Amnesty International Hungary head Dávid Víg said the government’s idea of a good scientist was one who adapted their research to political goals. The cabinet, he added, did not trust parents, teachers or civil society.

Márton Asbóth, a lawyer for the TASZ human rights organisation, insisted that the government was “deliberately destroying public education”, and called the cabinet an enemy of free-thinking and acting citizens. He said the amendments to the law were “unconstitutional and severely restricted rights”. TASZ, he added, would appeal against the law at the Constitutional Court.

In a call on Facebook to followers, the organisers said they would not remain idle while the government set about “destroying the public education system” and dismantling alternative schools. Further, they said it was “unacceptable to systematically lower the standard of education” and “to deprive teachers of their freedom”.

Meanwhile, the parliamentary groups of five opposition parties are turning to the Constitutional Court, seeking to have amendments of the public education law the parliament accepted in July annulled.

At a joint press conference of the Socialist Party, the Democratic Coalition (DK), nationalist Jobbik, green LMP and Párbeszéd, Socialist Ágnes Kunhalmi said the amendments “do not comply with the requirements of the rule of law” and are “unconstitutional”, harming the basic right to freedom of information, the freedom of opinion and children’s right to education.

The new regulation would make it mandatory for children to start school at the age of six, Kunhalmi noted. Up to now, experts decided whether a child was ready for school. Kunhalmi also called on parliament to comply with an earlier ruling of the top court and create a system considering individual cases of children struggling with learning or behavioural difficulties.

DK deputy group leader Gergely Arató said that the new legislation would bar parents from determining how their children should be taught and stop teachers from exercising their professions freely. It also curbs private schools’ possibilities in outlining their education programmes, he said.

Commenting on the press conference, ruling Fidesz said the opposition “has the upcoming local elections and their own power games at heart, not the interests of the children.”

They would have otherwise voted for the government’s family protection schemes and the budget, which allocates 645 billion forints (EUR 1.9bn) more to education than “the left” did, the statement said. The amendments of the law on education are in place to protect children’s interests, Fidesz said.