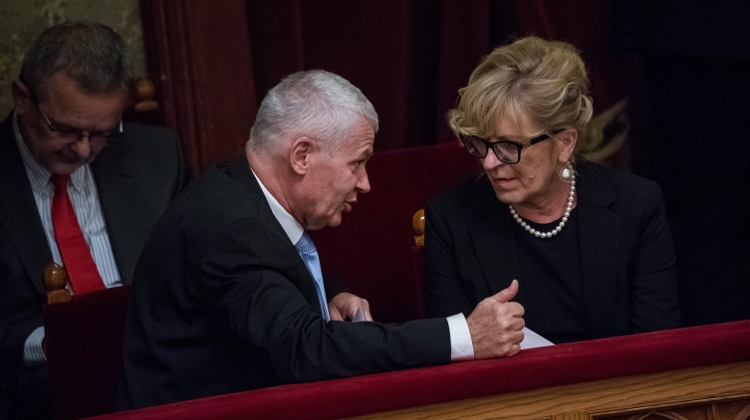 A left-wing commentator calls both the Chief Prosecutor and the new Constitutional Court judge controversial figures who have harmed the rule of law in Hungary. A pro-government columnist praises their record.

Péter Polt was elected by Parliament for his third nine-year term as Chief Prosecutor on Monday, while Tünde Handó who has served as President of the National Office for the Judiciary was elected to a 12-year term on the Constitutional Court.

The government side has the two thirds majority of parliamentary seats necessary to elect those key officials. Opposition MPs either boycotted the vote or voted against both candidates.

On Mérce, Nóra Diószeghy-Horváth takes the appointment of the two officials as proof that Fidesz doesn’t recoil from aggressively using its qualified majority to impose its will in the face of serios misgiving from the opposition.

She accuses Mr Polt of severe political bias, as he found nothing to investigate in the controversial ‘settlement bond’ project or matters reported by OLAF, the EU agency against fraud when they concerned people connected to the government.

As for Ms Handó, the left-wing author remarks that she has repeatedly been accused by the National Judicial Council, a body elected by Hungary’s judges, of arbitrarily nominating leading judges and relocating cases from one court to another.

Neither of the two personalities deserve to be elected to posts so important for the rule of law in Hungary, she writes.

In Magyar Nemzet, on the other hand, Áron Nagy thinks both Ms Handó and Mr Polt deserved their posts. Under Mr Polt, he argues, 95 per cent of indictments have led to corresponding court sentences, with exactly the same sanctions as proposed by the prosecutors in 80 per cent of the cases.

As for the cases reported by OLAF, he writes, inquiries have been launched in 45 per cent of them over the past 7 years, while the EU average amounts to 36 per cent only.

He ascribes Ms Handó’s conflicts with leading judges to her effort to introduce new generations of judges to break up the network of closed cliques of people subservient to local chief judges.

Ms Handó has often been praised by opposition opinion leaders for defending court rulings against media criticism but is called an agent of the government by the same people whenever her decisions are not in harmony with the interests of the opposition, Nagy writes.