Hungary To Maintain Anti-Migration Policy: “Only Hungarians Can Replace Hungarians” 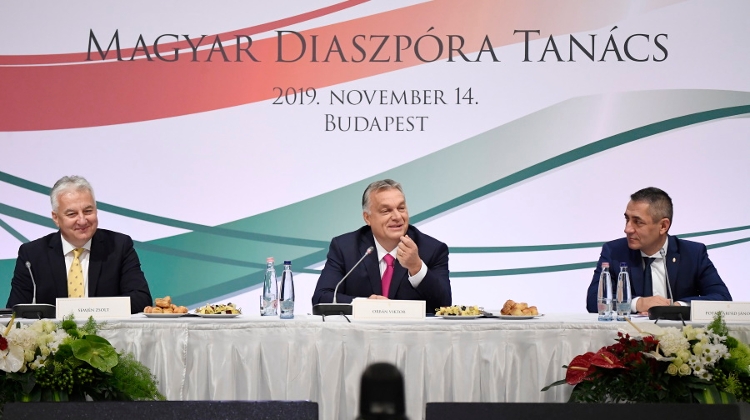 Hungary needs to maintain an antiimmigration policy because “only Hungarians can replace Hungarians”, Prime Minister Viktor Orbán told the 9th plenary session of the Hungarian Diaspora Council in Budapest.

“A country affected by population decline must not live under the illusion that it can solve demographic issues without making its own efforts,” Orbán said.

The government will continue its fight against migration because it is a global phenomenon which “will stay with us”, considering that “Africa has only started moving”, he said, adding that the supporters of migration accused Hungarians of having a “heart of stone” but Hungarians were actually willing to help.

“Help must be taken to where the trouble is instead of bringing the trouble here.” He cited the examples of Iraq, Syria, Jordan, Lebanon, Nigeria and Ethiopia as migration-hit areas where Hungary had provided help.

Commenting on domestic politics, he said that despite some losses that the ruling parties had suffered at the recent local elections, they had received a mandate to continue a programme focusing on a “strong Hungary”.

Public debt has decreased, growth is around 4-5% annually and even though the Hungarian economy, because of high exports, is prone to react sensitively to external trends, the Hungarian government has introduced an “action plan” to combat an international “cooling” of economic conditions, he added.

The government aims to ensure that Hungary’s economic growth stays around 2% above average European Union growth, he said.

Fighting poverty and the integration of the Roma have been among the most important undertakings of the government, he said. Citing the results of recent research in social disparities, he said the number of Hungarians suffering from serious economic hardship has dropped to record low compared with recent decades. Last year, more Hungarians repatriated than left to work abroad, he added.

Many efforts have been made to make families strong, because “a strong Hungary cannot exist without strong families,” he said. In order to stop population decline, a ratio of 2.1 children born per woman should be achieved, he said. But this can only be done with long-term family policies, and the results will only become noticeable in around ten years, he added.

A second family protection action plan is currently in the making for next year, he said. Orbán said national culture was also a vital element of a strong Hungary. “It’s the state’s task to nurture it,” he said.

Regarding culture policy developments, he cited the example of a project to revamp Buda Castle, another to restore public spaces around Parliament to their prewar state and the Liget museumconstruction scheme in the City Park.

Commenting on the latter, he said “thank god, we have accomplished around three-quarters of the plans” and the recent changes in power relations in Budapest will effect only the remaining one-quarter or one-third, albeit seriously. Budapest belongs not only to its residents but to all Hungarians, Orbán said, expressing hope that Budapest would not lose its “capital of the nation prestige” in the years to come.

Orbán also argued for the need for a strong army, adding that NATO in addition to a strong national defence force together would underpin security. By 2026, Hungary’s army will be able to guarantee the country’s security -- even without NATO -- if there’s a regional conflict, he said.

He reiterated that Hungary must pursue policies that make Berlin, Moscow and Istanbul equally interested in Hungary’s success, and good relations must be maintained with all three powers. Orbán said Hungary had enough strength to convince Hungarians to stay in their place of birth.

This is the reason why a responsible neighbourhood policy has been launched, because it is in Hungary’s interest that the country’s neighbours should develop at a similar pace. To serve this aim, common economic development schemes have been launched with several neighbouring countries, he said.

Commenting on diaspora Hungarians, he said their number was estimated at 2.5 million, with the majority living in the US and Canada. The Hungarian government has several schemes to help diaspora communities “join the blood circulation of the Hungarian nation”, he added. Plans are afoot to set up a Hungarian emigration and diaspora centre, he said.

Commenting on Ukraine, he said that despite several attempts, he had still not managed to meet the new president, Volodymyr Zelensky. He expressed hope, however, that following the former anti-Hungarian government in Ukraine, the political elite under the new president’s leadership would accept Hungary’s “reaching out”.