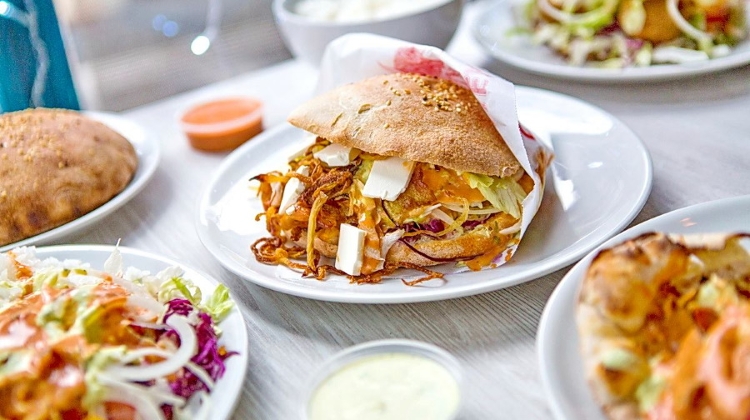 There are a staggering number of kebab shops in Budapest. Staggering being the operative word because, for many of us, a kebab is simply something we aim at our faces after a long, mostly liquid night out.

If you’ve ever eaten a kebab you’ll know that it can sometimes be a risky business. Quality can vary wildly and some kebabs should come with a health warning.

Which is why we should be thankful for Irish movie star Colin Farrell. Shooting the mini-series “The North Water” in Hungary, Farrell discovered Hari Kebab in District VII and, according to the restaurant’s owners, has already popped in for a kebab on more than one occasion.

Farrell’s endorsement is not to be taken lightly. Especially if, like me, you’re partial to the occasional kebab (known in Hungarian as gyros, a loanword from Greek) but have no idea which restaurant to grace with your custom.

For the past 25 years, Farrell has frequented the Abrakebabra in his hometown of Dublin, Ireland. Apparently, the first thing he does on his way back from the airport is stop for his usual kebab, large fries and Coke. Given that Farrell’s father ran a health food shop and he’s a keen practitioner of yoga, he clearly believes the occasional kebab is perfectly compatible with a healthy lifestyle.

That intrigued me most about the story of Colin Farrell and Hari Kebab was how he found it in the first place. It’s not exactly in a prime location in Budapest’s glittering downtown. I got in touch with Attila Harsányi, manager of Hari Kebab and one of the owners.

“We don’t know how he found us,” Harsányi told me. “But we recognized him on the second or third visit. He was very nice, open and friendly. We took a photo with him but didn’t want to be too pushy.”

Given that, according to Kitti Tordai of Daily News Hungary, Farrell was hiding behind a long beard, spotting him must have been quite an achievement. He also played a Hungarian in the movie “Dead Man Down” and may have used his finely-honed acting skills to appear as much like an ordinary Budapest kebab muncher as possible.

But perhaps eagle-eyed Hari Kebab staff were alerted by the ferocity with which Farrell tore into his kebab.

Farrell returned to Hari Kebab eight or 10 times altogether, which gives you some idea of how fine the kebabs are.

One time, Harsányi told me, he brought the entire film crew of between 20 and 30 people with him. Unable to resist temptation, Harsányi asked Farrell why he kept coming back.

“Hey Brother,” Farrell said. “I eat kebabs all over the world because I love them. But I haven’t eaten any as delicious as these before.”

Harsányi was moved. “It’s hard to believe what he told me. I felt so great. I’m pretty sure we’ll see him some more.”

When Hari Kebab opened in March 2017, it was a dream come true for Harsányi, his brother Zsolti and Zsolti’s partner Judit. The brothers Harsányi had become tired of having to travel abroad for a decent kebab. From the beginning, they wanted Hari to be more than just another one of the countless kebab joints all over Budapest.

“We wanted to prove that it’s possible to make kebabs that are as good as food you’d find in any good restaurant,” Harsányi explained. “Zsolti and Judit spent several years in an authentic Turkish place learning all the tricks it takes to make great kebabs. We combined their experience with my entrepreneurial ambitions to launch Hari. There’s actually a little wordplay going on with our name. In Hungarian, ‘hari’ means a small bite.”

Although the Harsányis and Judit took care to learn the traditional ways of making delicious kebabs, they’re proud to have a created a kebab in their own style made with heart and soul.

They also use locally baked fresh bread, offer huge portions at reasonable prices as well as unique flavors and combinations. Other little touches include inviting customers to pay into an honesty box for tea and coffee. Making sure that customers enjoy the experience of eating at Hari is just as important as the quality of the food.

And has the endorsement of Colin Farrell paid dividends for Hari Kebab? “We’ve seen more and more articles about him and us, which is obviously good for business. Although we can’t say that every new face we see is the result of him, traffic has increased notably.

But we’re not letting this go to our head. We just keeping doing what we’ve always done, striving to give our guests that particular ‘Hari Feeling’, which is what our beloved customers call it. We want to keep evolving to infinity and beyond!”

Hari Kebab is at 6 István utca, a few minutes’ walk away from Keleti station. Find out more at www.harikebab.hu.

As I said, it’s hard for a novice without Colin Farrell’s connections or nose for excellence to find a great kebab restaurant in Budapest. I asked around and two names kept coming up: Byblos and Szeraj.

Byblos is actually a pretty upmarket Lebanese and Levantine restaurant on Semmelweis utca.

Szeraj, at Szent Istvan Krt, is a Turkish and Middle Eastern restaurant and is somewhat of a Budapest institution that’s been around for 20 years and is popular with locals, especially late at night.