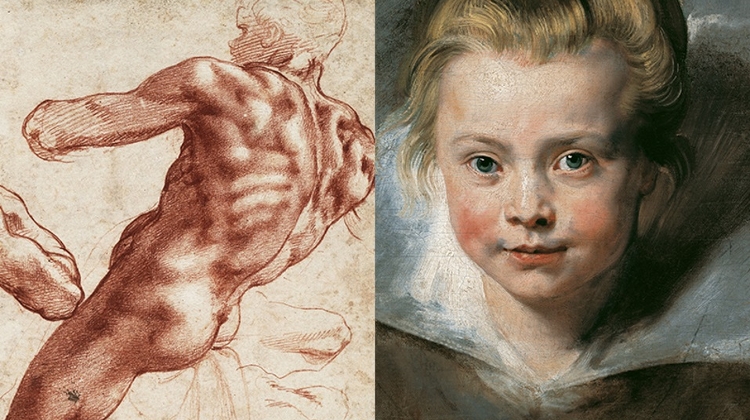 In the renovated Museum of Fine Arts, a show will be organised from Michelangelo’s works in spring 2019, and it will mount a large-scale exhibition in autumn with the title Rubens and His Age.

The Triumph of the Body: Michelangelo and 16th-Century Italian Drawing

Following its Leonardo Da Vinci exhibition, from spring 2019 the Museum of Fine Arts will host a show of the drawings of Michelangelo, the other genius of the Italian Renaissance.

Drawing played a central role in the art of Michelangelo, who left behind an outstanding legacy mainly as a sculptor but also as a painter and architect. His drawings will allow an insight into the creative process of the master’s celebrated works, while also attesting to his virtuoso handling of drawing techniques to achieve a wide range of artistic expression.

The depiction of the human body was pivotal to Michelangelo’s art.

The Budapest exhibition will display thirty of the master’s nude studies, loaned from the world’s most prestigious collections, including the British Museum, the Uffizi, the Louvre, the Casa Buonarroti, the Albertina, the Teylers Museum and the Ashmolean Museum.

Michelangelo’s masterpieces, such as numerous drawings made for the Sistine Chapel ceiling and The Last Judgement, will be shown in the constantly changing artistic environment of the 15th and 16th centuries, alongside drawings by his most talented contemporaries, including Leonardo, Raphael, Signorelli, Pontormo, Bronzino, Salviati and Rosso Fiorentino.

The Budapest exhibition comprising eighty drawings will be the first to bring Michelangelo’s unparalleled art to the Hungarian public.

Rubens And The Heyday Of Flemish Painting

The exhibition will be the fifth part in the series launched by the Department of Old Master Paintings (earlier called the Old Masters’ Gallery) presenting prominent art historical periods and outstanding national schools of painting.

The series debuted with a show spanning centuries of Spanish painting and continued with an exhibition of masterpieces of the Italian Renaissance (from Botticelli to Titian) and was followed by Italian sei- and settecento masters (from Caravaggio to Canaletto).

The last exhibition before the museum’s reconstruction showcased unparalleled paintings from the Dutch Golden Age and included works by Rembrandt, Vermeer van Delft and Frans Hals; the show attracted almost a quarter of a million visitors.

The new exhibition, planned to open in autumn this year, will focus on the 17th-century heyday of painting in Flanders, the other part of the Netherlands, hallmarked by Rubens, Van Dyck and Jordaens.

The exhibition is built on the Museum of Fine Arts’ rich Flemish material but it will also include loans from several renowned foreign collections, such as twenty outstanding masterpieces from The Liechtenstein Princely Collections in Vienna, including a piece (Decius Mus Relating His Dream) from Rubens’s large-scale Decius Mus Cycle, which will be displayed alongside a special tapestry made after the painting and woven with gold and silver thread (Palacio Real, Madrid).

These two works will be presented together for the first time. The main goal of the exhibition is to highlight the absolute primacy and pivotal force of Peter Paul Rubens’s artistic output through works in our own collections and the loaned pieces, while showcasing the versatile, stylistically and thematically rich 17th-century Flemish painting, which developed from and alongside Rubens.

Besides this, we want to draw attention to the significant activity of Flemish artists in Central Europe as well as the cultural ties between the two cultural regions, in which a key figure was Archduke Leopold Wilhelm of Austria.

The museum loaned works for the show, comprising some 120 exhibits, from 50 or so prominent collections, including the Hermitage, El Prado, the Uffizi, as well as the national galleries of Washington and London. Apart from works by other masters, visitors will be able to see some thirty masterpieces by Rubens and more than ten by Van Dyck.