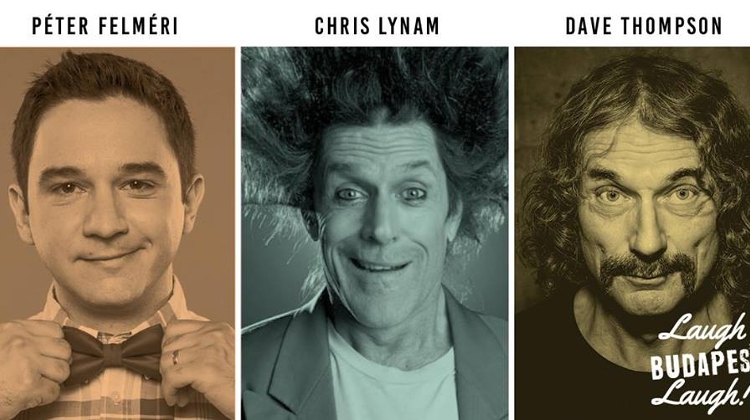 The comedic capers continue at The Studios as Laugh Budapest Laugh delivers the best of English language comedy in the city.

Péter Felméri
As the member of Dumaszínház, Péter is one of the pioneers of the Hungarian comedy scene. Started doing comedy more than 10 years ago, won the Transylvanian Comedy Festival and moved to Budapest to pursue his passion.

Chris Lynam
With an exquisite grasp of the grotesque, Chris Lynam has been feverishly subverting the traditions of the stand-up for more than thirty years. His reputation for unpredictable comic mayhem has propelled him to the four corners of the globe, and viewers and audience attendees here and throughout the world have been aghast and agog at his televised antics and stage performances.

Dave Thompson
Dave is a reincarnation of the Ancient Egyptian Pharaoh Yakbim Sekhaenre’s court jester Djedptahaufankh. He entertained the pharaoh and his family for 24 years. In 1779 BC, Dave (or Djedptahaufankh as he was then known) misjudged a joke about Pharaoh Yakbim Sekhaenre’s daughter, and was ritually disembowelled. His body was thrown to the crocodiles.
In his current incarnation, Dave played Tinky Winky, the purple Teletubby.

Get your laugh on at The Studios!

Don't miss out on eating and seating - check out your options here.

RVSP if you wish to reserve a ticket BUT please note that all tickets must be collected by 7.30pm on the night otherwise they will be allocated to the waiting list on first-come first-served basis.