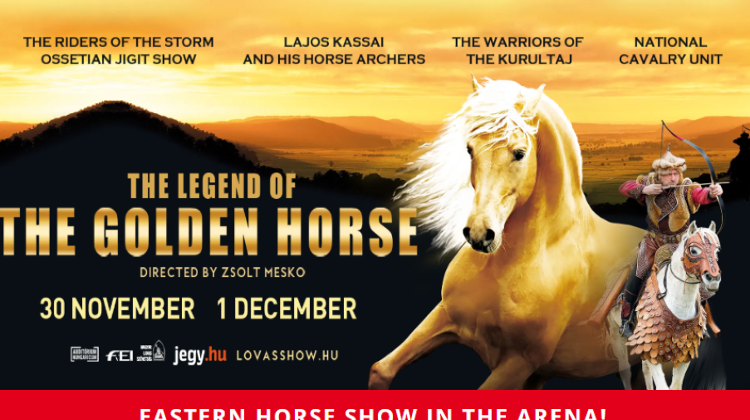 A never-before-seen equestrian show is to take place on 30 November and 1 December at Budapest Aréna. The event’s leading man is horse archer Lajos Kassai, and as special guests, the Ossetian Jigit Show’s Riders of the Storm will also be part of the performance.

The list of participants is impressive and includes 100 horsemen, 70 horses, horse archers, Győr Ördöglovas Group with Szilárd Tóth, the Warriors of Kurultaj, the National Cavalry Unit and legendary actor Károly Mécs. It’s going to be monumental!

The Legend of the Golden Horse tells a story from the time of the Hungarian conquest. According to the narrative, chieftain Rajan is preparing to bid farewell to the throne and aims to give the command over to someone worthy of being a leader.

He wants the tribes of his empire to live in peace after his retirement. But which of his three sons should be his descendant? The chieftain summons candidates to prove their aptitude in 3 trials related to weapon usage in a fight against the best valiants.

As a reward, the one who rises to the challenge will be the descendant and deserve the hand of the empire’s most beautiful girl, Mildana, as well as the chieftain’s Golden Horse.

The oldest brother, Gibárt, is the first to fail and as a result turns his back on his brothers, Oguz and Almár. He is furious; he leaves the family behind but steals the Golden Horse.

The trials are no longer important, Rajan, his two sons and the valiants must find the horse and bring it home. In the meantime, Gibárt and his warriors plan to kidnap Mildana during the night. When father and sons return, Gibárt rides away, but on his way the Golden Horse shakes him off its back and returns to the chieftain.

Finally, Rajan chooses his youngest son, Almár, to be his descendant. They invite neighbouring tribes’ leaders and warriors to his wedding with Mildana which turns into an amazing equestrian celebration where every horse rider wants to show off their skills.

Almár forgives his disloyal brother and pushes him to make peace with his estranged father. Chieftain Rajan’s Golden Horse is now owned by Almár, but only if it accepts the young man as a new owner, proving that Almár is suitable for the role of being a leader.

The performance titled The Legend of the Golden Horse is brought to life by Győr Ördöglovas Group coordinated by Szilárd Tóth. The internationally acclaimed company promises a spectacular show with scenic elements.

Among the participants there’s Lajos Kassai, a prominent figure in modern horseback archery, and his team. If it wasn’t for him, who is a Merit of the Hungarian Republic-winner, probably there would be no horse archer teaching programme at the University of Physical Education that is actually the very first institution in the world to accept this education practice.

The battle scenes feature the warriors of Europe’s biggest traditionalist event, the Kurultaj. The association’s members are hundreds of horse riders and thousands of pedestrians who actively participate in events wearing mainly ancient Hun and Magyar costumes.

The monumental horse theatre attraction merges 21th century show elements with the millennial values of eastern equestrian traditions. Fast horses, a cloud of arrows, battle scenes, falcons and fire rain, all in The Legend of the Golden Horse show.

Be a part of the celebration, purchase your ticket on jegy.hu.