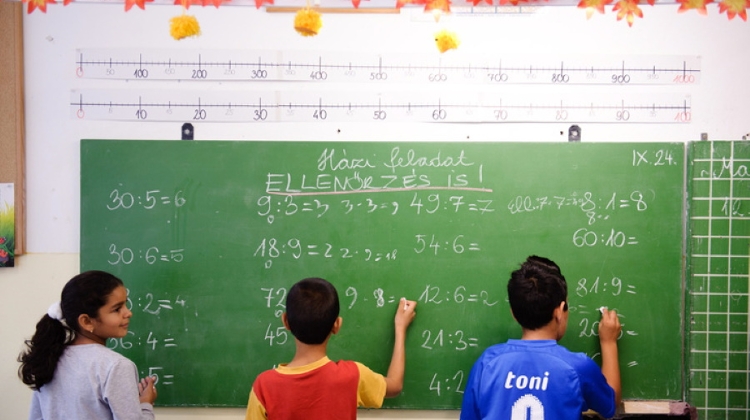 Liberal and left-wing commentators accuse Prime Minister Orbán of racism for publicly criticizing a court ruling granting compensation to Roma families whose children were enrolled in separate classes to non-Roma children. Pro-government columnists agree with the Prime Minister and find the ruling outrageous.

In a second instance verdict, a court in Debrecen, a city in eastern Hungary, ruled against the segregation of Roma students in the municipality of Gyöngyöspata.

The court ruled that the families of the 66 Roma students who were enrolled in segregated classes should be paid a total of 99 million Forints, to compensate for the discrimination and the lower quality of education they received. László Horváth, the local Fidesz MP, accused the Roma families and the NGOs who took the case to court of being agents of the ‘Soros network’.

The court decision would undermine social peace in the municipality, he added. In his Thursday press conference, PM Orbán claimed that the verdict is not in line with local people’s sense of justice, as Roma families would get large amounts of money without working hard for it.

The Prime Minister said that if people are educated in ‘special classes’ not because of the colour of their skin, but due to their special educational needs, that is not a real case of ethnic segregation. While the Debrecen Court’s decision is legally binding, the case has been taken to the Curia (the Supreme Court) for judicial review.

On Index, Gábor Miklósi finds Viktor Orbán’s statement ‘unprecedented open anti-Roma instigation by a Hungarian Prime Minister’. The liberal pundit thinks that Mr Orbán would object if his own children were victims of segregation.

Miklósi recalls that Roma pupils in Gyöngyöspata received lower quality education, were not granted access to school sports facilities, and were not accepted at extracurricular school events and excursions. Miklósi finds it particularly tasteless to claim that the families of Roma children who were discriminated against do not deserve financial compensation.

On Mandiner, Mátyás Kohán writes that those who accuse the Gyöngyöspata school of racist segregation are not familiar at all with what he calls ‘local realities’.

The pro-government blogger thinks that elites, including himself, have no right to criticize local teachers and segregated education, as they would never send their own children to rural schools where disadvantaged Roma kids are taught in the same classrooms along with non-Roma middle class kids.

Kohán finds it justified to offer separate education for those Roma students who lack basic writing, reading and maths skills. Those pupils, he suggests, including non-Roma and Roma who do not need special help in the basics, would be held back if they were taught in the same classes, he asserts.

He claims that the anti-discrimination principles advocated by NGOs who criticize segregation are based on ‘imported American Marxist ideology’ designed for the integration of black children.

As the problems of Hungarian Roma are very different from those grounded in slavery, one cannot apply the same recipe to remedy the different problems, Kohán writes. He adds that the victimization of Hungarian Roma may lead to an ‘imported slave mentality’.

As for the compensation, Kohán thinks that ‘it rewards the guilty’, as the money would go to families that are unable or do not even want to provide proper circumstances for their children.

Writing on the same blog site, Gergely Szilvay contends that spontaneous segregation is not segregation at all. The conservative historian claims that in the US, many black families preferred to send their children to black-only schools rather than to mixed classes.

Separate education serves the maintenance of cultural identity, Szilvay asserts. He adds that mixing different children does not facilitate integration and the equality of opportunity. He thinks that if separate education results from parents’ spontaneous decisions, it cannot be regarded as forced segregation.

Apáti accuses critics of engaging in ‘anti-Hungarian instigation’ that aims at discrediting the Hungarian government. He contends that Gyöngyöspata classrooms were not segregated on a racial basis, but on social ones – children who did not respect basic social and cultural norms were kept separate from other kids. Apáti adds that teachers willing to work with these kids deserve praise and respect.

He also lambasts Roma families who insist on getting the financial compensation even if it will lead to the bankruptcy of Gyöngyöspata. Apáti finds it unjust that hard working people need to pay the compensation. He adds that Roma will be victimized as a result of the ruling.

NGOs who support the Roma families have announced that they will not ask for the compensation to be paid until the Curia concludes its review, and said that the sum should be provided by the government rather than the municipality of Gyöngyöspata.