Video: Fradi Roar Back To Salvage Point Against Kiev 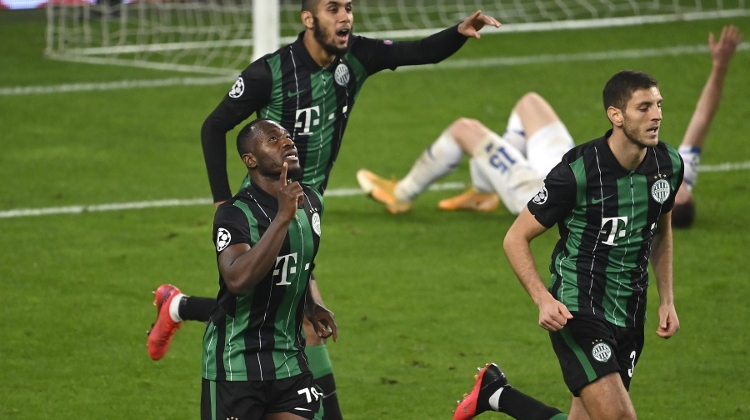 Franck Boli was the last-minute hero as Ferencváros recovered from two goals down to draw 2-2 with Dynamo Kiev in the teams' second Champions League group-stage fixture of the season in the Groupama Aréna in Budapest on Wednesday evening.

Ferencváros lined up in an adventurous 4-2-1-3 formation, goalkeeper Dénes Dibusz shielded by a back-four of Heister, Kovacevic, Blazic and Lovrencsics and two central defensive midfielders in Somalia and Kharatin.

Dávid Sigér was given an attacking midfield role behind a front three of Tokmac on the left, Zubkov on the right and Isael through the middle.

An even start soon gave way to the Ukrainian club, a good deal more experienced at European level, taking a measure of control, Dibusz getting down smartly in the 19th minute to palm out a low right-footed from left-back Karavaev after he'd burst into the Fradi penalty area and collected a pass from the left.

Worse was to follow in the 27th minute when Ihor Kharatin was penalised for handball inside his own penalty area and Dynamo's Tsygankov slotted the ball into the bottom-left corner of the net from the spot.

Fradi then fell further behind in the 41st minute when a swift Dynamo counter-attack resulted in a sliding Gergő Lovrencsics diverting a low, right-wing cross from Buyalskiy onto the foot of a fortunate Carlos de Pena at the back post, the ball flying straight into an unguarded net with Dibusz unable to get across in time.

For nearly an hour Ferencváros' forwards had been kept as quiet as the empty stadia they'd been used to playing in so far this Champions League campaign, but the 6,444 spectators allowed in the Groupama Aréna were making their presence felt and their encouragement was rewarded in the 59th minute when Zubkov threaded a pass with the outside of his right foot through to Tokmac Nguen on the right of the Dynamo penalty area, his first touch setting him up perfectly for a stinging half-volley which arrowed in off the far-left post into the left side of the visitors' net.

Mircea Lucescu's Kiev side did well to keep a reinvigorated Fradi at arms' length during the following minutes but that changed when visiting captain Serhiy Sydorchuk was dismissed for a second bookable offence in the 86th minute.

Finally, Ferencváros head coach Serhiy Rebrov's side was rewarded in the 90th minute when Robert Mak fired in a free-kick which was controlled well by fellow substitute Laïdouni on the left of the area and scuffed closer towards goal where a third replacement, Frank Boli, dispatched the ball first-time high into the Kiev net to secure an unlikely point for his indefatigable team.

Indeed, Mak's dipping volley with the last kick of the game nearly sent home fans into ecstasy, but at least Rebrov can look back on a well-deserved point against his former team.