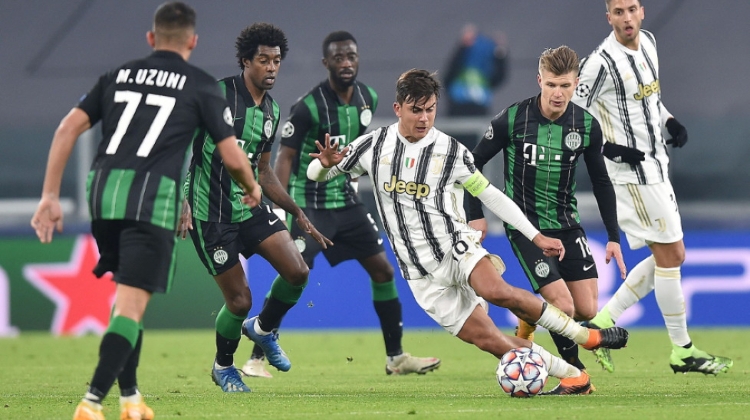 Forward Myrto Uzuni gave Ferencváros a 19th-minute lead in the Juventus Stadium in Turin but the hosts' Cristiano Ronaldo crashed in a low equaliser just after the half-hour mark and his striking partner Alvaro Morata completed the comeback in second-half added time to leave Fradi disappointed at defeat in Italy on Tuesday night.

Ferencváros lined up in a proactive 5-2-3 formation, Dénes Dibusz in goal behind a back five of Marcel Heister, Lasha Dvali, Abraham Frimpong, Miha Blazic and Gergő Lovrencsics. Dávid Sigér and Somalia shored up the central midfield with Tokac Nguen, Myrto Uzuni and Oleksandr Zubkov the attacking trio.

The early signs were good for Ferencváros and the visitors capitalised on a stable start by edging in front as the first half approached its midway point, Uzuni darting in to reach Tokmac's deflected right-wing cross first and flick the ball past Wojciech Szczesny's right hand into the far left side of the Juventus goal.

While Ferencváros looked assured in defence, there is sometimes little one can do when confronted by real attacking class and that was the case in the 35th minute when Ronaldo received a pass from Juan Cuadrado, cut inside from the right channel and rifled a 20-metre drive past Dibusz into the bottom-right corner of the net.

Federico Bernardeschi and Alvaro Morata both struck the woodwork for Juventus early in the second half, the former when Dibusz diverted his volley onto the crossbar, as the hosts visibly stepped up a gear but it seemed stoic Fradi defending would see the club through to a famous draw.

However, in the second minute of added time, Cuadrado sent in a superb cross from the right and Morata's downward header agonisingly found its way past Dibusz to condemn Ferencváros to back-to-back home and away defeats against their illustrious Italian opponents.

Serhiy Rebrov's side will play at home to Barcelona next week before finishing the group away at Ukrainian club Dinamo Kiev in what will be a decisive fixture in terms of which team finishes third and qualifies for the knockout stages of the Europa League, both teams currently on one point in their four-team group.

Both sides will definitely finish behind Barcelona and Juventus, who are already guaranteed to be among the last 16 teams in the Champions League this campaign.

Video: Juventus Ease To Victory Against Fradi In Budapest