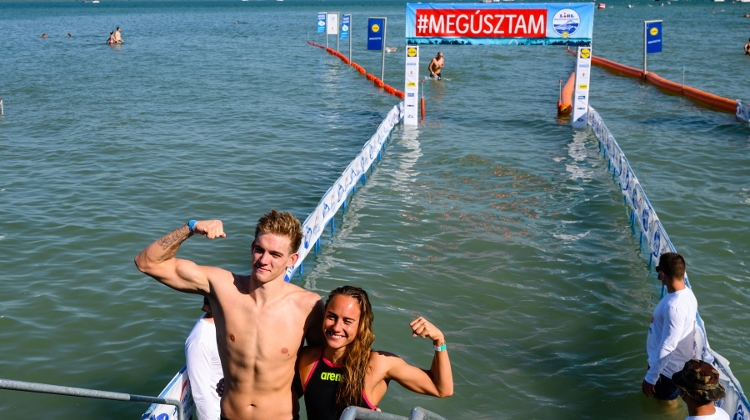 Swimming world champion Kristóf Rasovszky won the annual Cross-Balaton race in a record time on Saturday. The 23-year-old completed the 5.2km distance between Révfülöp and Balatonboglár in 57 minutes, just beating the previous record of 58 minutes and 33 seconds set in 2016 by Mark Papp.

The fastest among the women swimmers was Anna Olasz, finishing in 1 hour, 1 minute 37 seconds.

Over 9,800 people took part in this year’s big swim at the ‘Hungarian Sea’, mostly all were Hungarians with around 250 swimmers from other European countries, plus some from India and Canada.

They all swam in sunshine, the air temperature was 30 degrees C, while the waters of Balaton were slightly less at around 26 degrees C.

Due to the Coronavirus situation, body temperatures of swimmers were taken, with those showing 37 degrees C or more not allowed into the water.
Also, registration on-site was forbidden, and wearing masks was compulsory for competitors on board boats moving between the two shores of the lake.

As swimming trivia fans may know, the overall winner Rasovszky represented Hungary at the Rio Olympic Games in 2016, where he won the 5km open water event, and so it was not too surprising he won last Saturday at Balaton, still congratulations are due to him and all who managed the swim.